The J.O.B. adopt a hard-hitting, no-nonsense style on the emotionally wrought “Criminal”. Rhythm is everything and from the percussion all else flows flawless. With a deft attention to detail, they allow the whole of the collection to simply stun. Volume is a given for the way they make the listener experience the sound feels quite compelling. A physicality has an almost confrontational tact to it for they let the tension grow and build up in a way that feels their own. 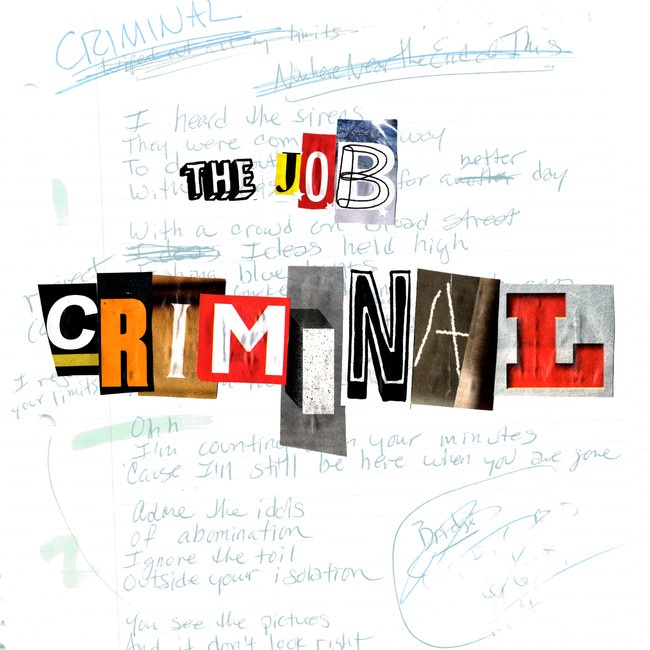 By far the highlight comes with the title track “Criminal”. Vocals have a swirling, serenity to them even as they explore an animalistic impulse. Guitars further help to punctuate the intense work, with the drums remaining the very center of it all. Never rushing things, the way that the piece has an undue sense of swagger about it further adds to the all-consuming spirit of the work. Layer upon layer filters into the fray while the tempo continues a mixture of grunge, downtempo, and the blues in a way that is colossal to fully behold. For the final stretch they let it all rush up to the forefront. Stripped down and even more economical, “Broken Heart” continues in a similar vein. Here once more he pours out his heart with a surprising vulnerability as the song builds itself up into a frenzy.

“Criminal” shows off the J.O.B.’s impeccable, unique style for they incorporate a wide slew of genres into the mix while remaining true to their razor-sharp vision.

Skope: What inspired your song “Criminal”? Was it any particular criminal or crime?

Jim O’Ferrell: We live in the city of Richmond, Virginia. We were rehearsing and writing songs when the protests came here last spring and summer. We watched the city ramp up for the inevitable clash, businesses boarded up, police barricaded the downtown. Huge hoards of pissed off civilians were confronted by battle dressed police, choked with tear gas, pelted with rubber bullets. Criminal is from a marcher’s point of view, it’s our snapshot of a moment on the street among the chaos in our hometown during the protests of 2020.

Skope: Have you committed any crimes yourself (If you are at liberty to say)? If so, have you been tempted by any crime or crimes, and how?

O’Ferrell: I may have exceeded the speed limit once or twice.

Skope: The song has a prominent bass line. Did its composition begin with this bass part?

O’Ferrell: Jared Merrill composed his bass lines over the basic guitar rhythm. He’s an intuitive bass player. It’s like he’s already heard the song and he’s just remembering it, amazes me with every song we write.

Skope: Were you listening to any music while writing and recording this song, which may have influenced it?

O’Ferrell: From the first chord progressions, I felt like I was channeling Gary Clark, Jr with this song. I finished the guitar version with lyrics, then Jared Merrill and Brian Penczak composed their bass and drums, and Jason Crawford created his killer guitar leads. The song turned out nothing like I first heard in my head. I love our songwriting process.

Skope: The vocal on “Criminal” vacillates back and forth between gruff singing, and high vocals? Is this something you apply to some, most, or all of your recordings?

O’Ferrell: I’m comfortable going up into my higher voice and I like the extra space to sing. It also gives Jared more room to move around with harmonies and create some cool backing vocal parts underneath. I see us developing that more as we go back into the studio.

Skope: “Criminal” has an extended electric guitar solo? It almost sounds live. Was it your intention to replicate a live performance, right there in the studio?

O’Ferrell: Absolutely. Jason wrote that guitar solo right there in the studio. He wanted it to feel improvised, raw and spontaneous. And he captured that; it’s all there, feedback and all.

Skope: “Broken Heart,” although a rock song, also has a Celtic feel in the vocal’s pacing. Is that style something that’s impacted your overall sound?

O’Ferrell: Good observation! One of my earliest songwriting influences was Gordon Lightfoot. I picked up some of his strum patterns along the way and it sort of became my default, especially with this kind of song structure. That carries over into some of our songs, but it’s not a common thread through all of our music.

Skope: Speaking of Celtic, I hear a bit of Thin Lizzy. An influence or is it just me?

O’Ferrell: My ancestry is from Ireland, but I’m from Virginia, and my Virginia family is from the Appalachian mountains which were settled by the Irish and Scots. I may very well have some sort of diluted Dublin dialect in there somewhere.

Skope: How were each of these songs written? As a group, or by one individual?

O’Ferrell: Typically, I’ll write a song until it’s at a level that I can play it at a local open mic, just me and my guitar, and see how it goes. If the audience connects with the song, I’ll take it to the guys and offer it up, see what they think. Here in pandemic-world, I can’t do that anymore, so I skipped the open mic step and took these songs to our rehearsal room and auditioned them for the guys when I felt each song was ready.

The songs that I write for our band are like black and white pictures in a coloring book. The guys provide the crayons and give them color and vibrance and vigor. I stay out of the way while they create their parts and it all comes together in the end. We wrote “Broken Heart” after the pandemic shutdown, but before the protests started. The first night of the protests, everything changed. Criminal came from that energy. We all dove head-first into Criminal because we all felt an urgency to capture the event while it was happening.

Skope: This EP has just two songs. Did you have more planned, or did you just think two were enough?

O’Ferrell: We start recording the next pair of songs this month and have more songs in the funnel. Our goal is to release a pair of songs every couple of months throughout 2021 until we have eight new studio singles out in the world, then press them all into a vinyl LP to drop around New Years. Hopefully, next year we’ll be writing songs on the road.