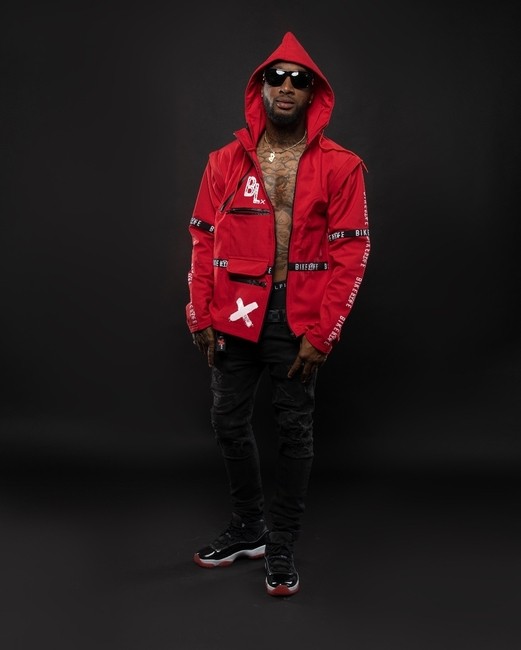 Even great hip-hop videos can sometimes be tough to relate to. Expensive brands, luxury automobiles, conspicuous consumption – all of that stuff is entertaining to watch but not so easy to attain. As a rapper on the rise, GoodLook is after all the material success he can get. But he’s not so far from the Cincinnati streets that he’s forgotten what it means to struggle for every dollar. His eyes are still wide open to every opportunity, and he remains as resourceful as he was when he was a complete unknown. Cleverly, he’s put that intellectual flexibility to work for him in the lively, funny clip for “Good Friday,” his latest single. Here GoodLook isn’t just the hedonistic rapper. He also plays the chauffeur who has to put up with the star’s demands, the butler who brings his sneakers on a silver platter, the security guard who copes with the consequences of all the partying, and several other characters, too.

The song itself is, simultaneously, an ideal soundtrack for a raucous night out and a demonstration of the breadth of GoodLook’s musical knowledge. Trap drums establish the beat and ground the storytelling in the here and now, but scratching and sound effects nod to hip-hop history. Then there’s GoodLook’s distinctive delivery: audacious without being overly aggressive, clever without being comic, rhythmically precise yet loose and swaggering. It’s a style and attitude we heard this fall on “Rich Dance,” an independent single and video that’s racked up hundreds of thousands of views on YouTube since its autumn 2020 release. “Rich Dance” immediately established GoodLook as a player whose scope and ambitions go way beyond the city limits of Cincinnati – a rapper with the vision, the personality, and the screen charisma of a multimedia star.

The “Good Friday” clip makes that versatility manifest. He’s as comfortable playing the money-counting ladies’ man as he is in the role of the beleaguered employee – and notably, it’s the working-class guy who has the last laugh. Director DreamVision alternates between kinetic wide-screen shots and smaller frames with a guerrilla cinema feel, and that serves as a striking visual metaphor for the blend of old and new that’s apparent in GoodLook’s mixes. He’s also a proud citizen of the Cincinnati rap underground, and he makes sure his city shines: its wide avenues, its brick buildings and backstreet clubs, and its pervasive atmosphere of freewheeling fun.