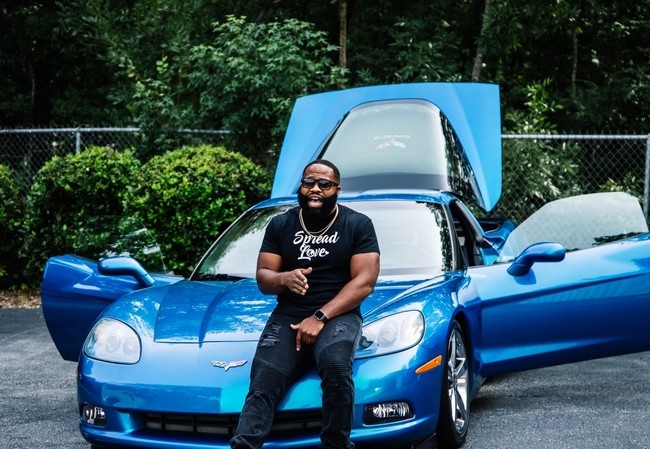 As a man who has been experimenting with music since middle school, Pierre Bless is in no rush to speed up his creative flow. Instead, he knows that stressing about success won’t bring success; what you put out in the universe will be what you get back. The Charlotte, NC rapper was born in Nuremberg, Germany but raised in the States. He discovered his talent in the classroom while making beats with his classmates, who were beatboxing. He was on-and-off with music during his teens and twenties, performing at various showcases and South by South West in 2014, where he shared the stage with 2Chainz, B.O.B., Young Thug, K Camp, Rich Homie Quan, and Trae The Truth. He finds influence from some of the top names in hip-hop like Nas and Mase. In 2017, Pierre Bless decided to tackle music full-time with his single “Large.”

The Pierre Bless moniker is based on his deep attraction and connection to universal energy in addition to his younger brother’s middle name, Pierre. His brand, Spread Love, is a parent company that encompasses his clothing line and record company. Whenever he puts pen to paper and words to the mic, Pierre Bless makes sure to create and perform music from his introspective lyricism and immersive hip-hop experience.

Success comes in many forms and at many different times but forcing it to come doesn’t always ensure the right delivery or the favorable outcome. That’s why Pierre Bless sits back and takes his time with his ambitions because every time is the right time. His new music video, “Right On Time,” portrays that exact sentiment as Pierre physically ticks around the clock, maintaining a strong stance and a dominating air. The clock he circles is stalled at 10:10, a significant moment that shows alignment in life and the path you’re on. He sits on the hood of a baby blue Corvette surrounded by dancers and models – unbothered and undisturbed – knowing that the universe has his back and will bring him what he needs when the time is right. Pierre Bless announces, “I’m in prime mode/ Head of my time/ Any time/ Every time zone,” inspiring those that have been chasing their dreams to stay on top of their game while not coercing superficial outcomes. Producer, StreetzMentor, even makes the beat spellbinding by entrapping us with the trap style and mesmerizing instrumental, making us fall deep and deeper into the enchanting world of Pierre Bless.