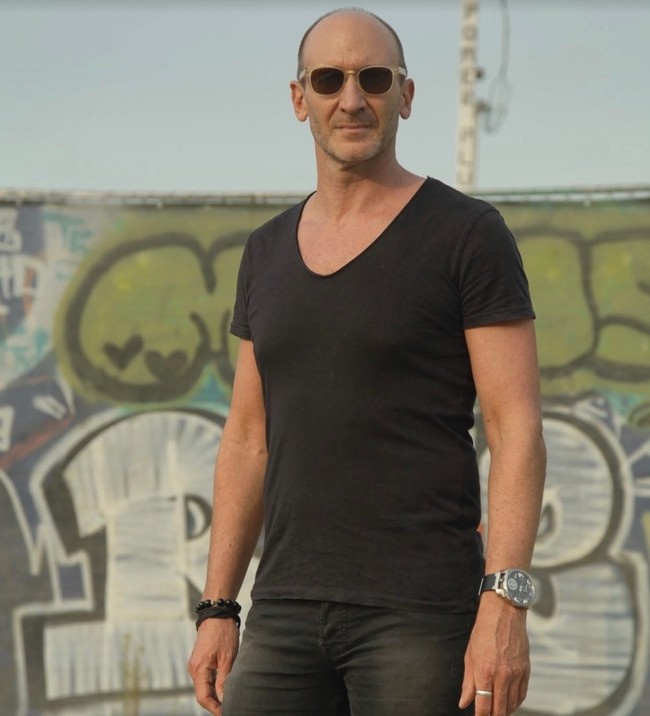 Sometimes a voice is more than just a voice; it’s a fire inside that demands release no matter what art form, no matter what it takes. LA’s Eddie Cohn has that kind of voice, and it’s led him down countless fascinating paths in what has become a full life. But no matter how he’s saying it, he’s always seeking one thing through his music, podcast, yoga classes, and upcoming novel: human connection. Connection and curiosity drive him to create and do his part to get us out of our heads, off of our phones, and back into growing with, learning from, and maybe even dancing with each other. For Eddie, music’s taken the front seat, after decades of making records, DJing, then moving into other mediums. The current state of the world – chaos and impermanence – brought him back to his first love because, as he recently told LA Voyager, “Music has the power to heal and dramatically shift the energy in a room and it’s always been there for me. A good song can stay with you forever.” “Freedom” is Cohn’s first single in a few years, and it lays down an uplifting groove while asking some pretty big questions.

The song shares more than just a sonic palette with OK Computer-era Radiohead: themes of control, letting go, facing the darker side of things head-on are all here. The title track off his upcoming record is a trancey, beat-driven exploration of the outside world and what it means for the world inside us. Electronic, tribal rhythms, akin to Peter Gabriel’s early work, push the song forward, as Cohn asks us – all of us, no matter our beliefs – “Where’s our freedom / No stars align / Where’s our freedom / Outside is the worst side.” Those rhythms give real emotional power to his pleas to reject tribalism, especially now that it’s become so alluring. Loneliness, death, health, the division and polarization in our society – yes, those are all there, there’s no putting a happy face on it. But there’s an incredible joy in the catharsis, which can only be understood if you listen close and let it wash over you and drown out the constant static of the devices and the division.

Cohn and director Leslie Andrew Ridings let go and let inspiration take over. They did what no longer comes naturally: they walked outside. They turned the camera on and captured some of the desolation and eerie quiet emanating from LA’s empty streets. Parking lots, side streets, alleyways; Cohn performs the song completely alone in a city of ten million. He’s such a charismatic presence that you might have to watch again to realize that it is broad daylight and there are no people anywhere in the shots. He anchors the video firmly in the present, cutting between half-second scenes of tense standoffs between police and protestors, a helicopter hovering far above, a syringe on a white table. The song and video present us with what’s become normal but are a powerful reminder that that’s not okay. Let’s sing, dance, get out there, and make the “old normal” new again.