“‘Communion’ represents the common difficulty we all have coping with fear and pain,” says Makes My Blood Dance lead singer Evan Russell Saffer about the band’s song “Communion.” If ever there was a time to bond with society at large about pain and struggle, it’s been 2020. 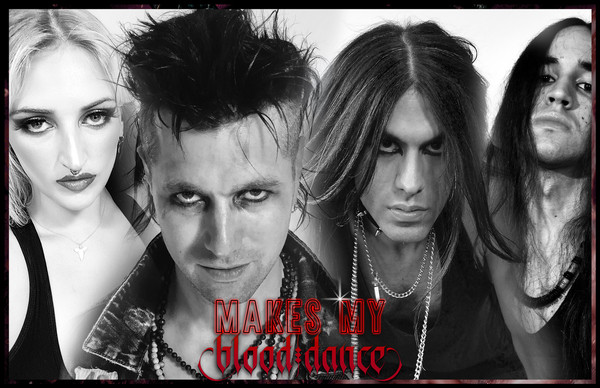 As demonstrated on previous singles such as “Power of the Lightside” and “Sick As Our Secrets,” Saffer and bandmate John Polimeni spare no details in the pursuit of the perfect “disco metal” song. If it means peeling back their own layers to reveal personal vulnerabilities rarely seen in the metal world, then that’s what they’re going to do. It’s in this willingness to open themselves up metaphorically that they also find the strength and support to overcome the adversity.

That brings us to “Communion,” which is the manifestation of these byproducts brought to life by mixer Dave Ogilvie (Tool, Marilyn Manson, Rob Zombie). It’s not to say that the song comes across as some sort of kumbaya, drum circle moment; it’s a straightforward dose of self-examination about how even though we may want to run away from challenges and difficulties, at the end of the day, there is nowhere to go. There’s no disgrace in feeling afraid because feelings are not facts. The song challenges the listener to rearrange their perspective to look at those feelings objectively and deal with them without becoming possessed by it.

Similarly, creating the video became a logistical hurdle that was something the band could either allow to become a roadblock or see as an opportunity to bring the vibes of “Communion” to life. Being based in New York City, the lockdown was particularly strict for the band, so they had to muster their creative spirit and create a video that still captured the track’s energy. Previous videos presented big picture themes and storylines that arched over the entire video. “Communion” presents itself more like a jigsaw puzzle. Individual shots of the band performing, a variety of story blocks and images reinforcing the vibes, and a dose of live footage under the explosive shouts of “I!” and “Why!” remind viewers that this is still one of the fiercest live bands on the scene. A true team effort built by creativity and determination, “Communion” is rewarding on so many levels. As the old saying goes, “it takes a village to raise a disco metal baby.”