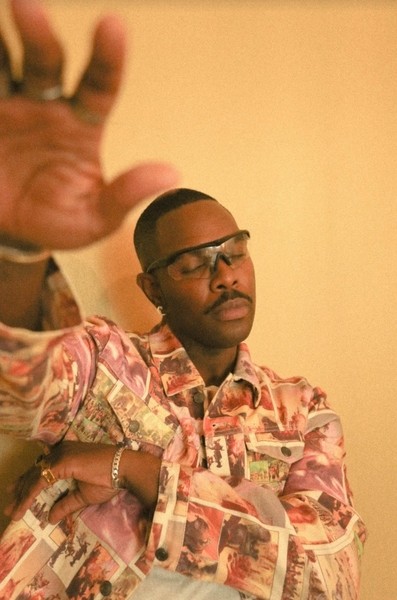 At a glance, you’ll know: ADIV couldn’t live anywhere but Los Angeles. A native New Yorker, his modern look is Hollywood fresh – he’s incapable of photographing badly, his sense of style is impeccable, and he fills out a film frame with the grace and confidence of a born star. His cosmopolitanism, sense of social consciousness, and laid-back cool are apparent in everything he does. If he weren’t a Southern Californian artist already, somebody enterprising surely would have picked him off the street and transplanted him there.

But ADIV transcends the city and the scene in which he’s achieved recognition. He brings elements of Nigerian aesthetics to his music and videos, thanks to many close friends, and the sound of the country is present in his grooves. Life Could Be Different, his latest project, is an amalgam of Frank Ocean-like avant-R&B, Caribbean rhythms, hazy Southern California sunshine music, Afropop animated by the spirit of Lagos, and ghostly, ethereal, experimental stuff that transcends genre completely. ADIV sings it all in a voice that, simultaneously, communicates confidence and longing, brashness and sensitivity. “Blue Gene,” the single from Life Could Be Different, comes on like a summer breeze. But listen closer, and you’ll hear the pains, the regrets, and the desperate hopes of a global citizen determined to squeeze all the soul his can out of the winsome melody he’s written.

Breyonna Holt’s radiant, sun-drenched clip for “Blue Gene” introduces ADIV as a deft juggler of cultural signifiers – a man comfortable working in many traditions but a prisoner to none of them. He can wear a West African shirt in one shot and a black cowboy hat in another and make the transition so seamless that you’ll hardly notice the difference. Holt’s camera finds the singer on a stylish ranch with handsome horses in the stable. It could be in Abuja, Montana, or Mexico City; its beauty is transnational, which is part of ADIV’s point. The “Blue Gene” clip also surrounds the star with beautiful, austere, offbeat-looking women, each one with an arresting sense of presentation: one, for instance, rocks a hairstyle that resembles a birdcage. ADIV and his friends do their part, too, staring down the camera with intensity and hunger to communicate. In one arresting shot, ADIV sings from between the big branches of a memorial tree. It’s at once a commemoration and a celebration, and an ideal backdrop for an artist who is always deeply rooted, no matter where he goes.