Angus Crowne is the self-described Godfather of Uke-Billy-Punk-Rock, and the songs on Let’s Fly supports this assertion. The album is filled with quirky post-punk music. 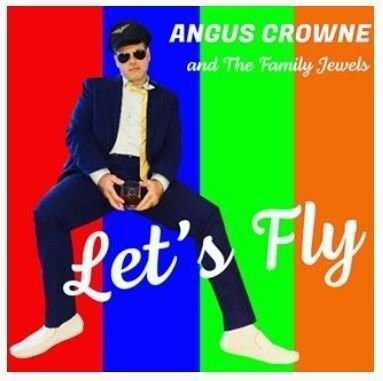 Crowne doesn’t so much sing, as talk-sing these eleven songs. The album’s title track, for instance, is a slightly funky, somewhat world music influenced piece. As Crowne monologues his way through a keyboard and guitar driven track, the group sounds a bit like Tom Waits during his Swordfishtrombones phase. Lyrically, the song is philosophical. “Why is it so wrong,” Crowne asks at one point, “to dream out loud?”

With “A Little Less Real,” Crowne can be heard fighting with himself. “I need to be a little less me,” he admits. It’s as though he’d been spending way too much time inside his own head. Too much introspection can be overbearing. This inward-looking song is followed by and especially outward-looking song. “Moulin Rouge” is a is a swing dance tune about enjoying night movements. “She Don’t Care” is also a jazzier number. Crowne even scats on that track’s chorus, and the arrangement includes an extended electric guitar solo. “Soft She Shuffle” is also a dance track, although mostly an instrumental one. “Destinations” is a different sort of dance track. It has the type of beat that would also work as a polka. This, though, isn’t an accordion and tuba-backed recording. Its lyric is all about the joys of travel.

For “Rose Wine,” Crowne sings a song that extols the simple life. He tells us he has a small house, an old car, and simple job. The title comes from his question, “Should I drink alcohol to feel more fine?” It’s an unusual song about a guy taking stock of his life. He lives a down-to-earth life and likes it that way. This is a strangely unexpected philosophy, especially coming from a musician. After all, musicians are most often those that want to live exciting lives they can also write about. In Crowne’s case, though, he’s just fine singing about an un-extravagant lifestyle.

“Why Do I Even Try” is a softer track, even though it goes to a shuffle beat. On it, Crowne even sings. He doesn’t talk as much as he actually vocalizes melodically. When he really tries to sing, as he does here, he sounds a lot like Lou Reed. Both are not what you’d term ‘pretty’ singers. Instead, they’re much closer to musical conversationalists. This vocal sound can be a bit of an acquired taste for some. However, also like Reed, Crowne is more about having something necessary to say, instead of sounding overly pretty on these songs.

Categorizing Angus Crowne and the Family Jewels is nearly impossible. It is a jaunty singer/songwriter album, which is unlike any singer/songwriter album you’ve ever heard before. Crowne is a true individualist, and his collection of songs consistently expresses his individuality. He is a sort of post-punk artist, even though nothing on this album sounds particularly punk. Or rock & roll, for that matter. You may not fully embrace what Angus Crowne and the Family Jewels do, but you also cannot ignore it. It’s unique and unusual, like a rare bird. And for that distinction alone, Crowne deserves much credit.