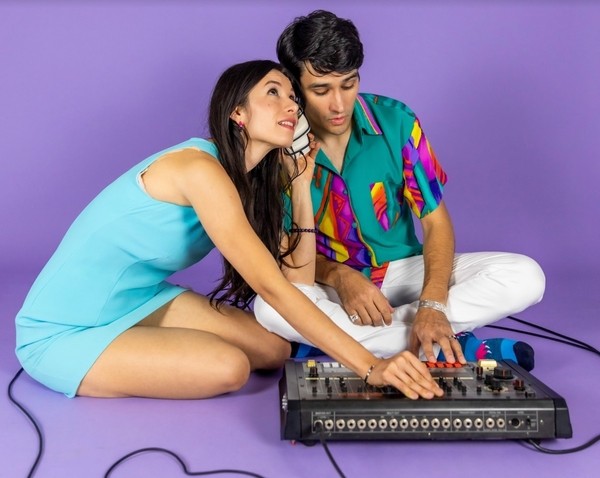 The presence of a DeLorean in a piece of filmed entertainment can only mean one thing: we’re headed back to the future. When Moonray singer and synthesist Barbara Higginbotham steps out from behind the wheel of a DeLorean in the opening seconds of the clip for “When You’re Around,” her hot pink and purple cosmetics and the cassette tape dangling from her gold chain speak volumes about her delirious aesthetic. Yes, Moonray – the Austin, TX group she formed with her husband Jonray Higginbotham – is well-acquainted with the gleaming synthpop sound of the ’80s. Honeymoon, their dazzling new EP, is crammed to the corners with the propulsive new wave beats, close harmonies, singalong choruses, and monster hooks we all associate with the early days of MTV.

Yet Moonray is far more than a throwback. Their songs are compositionally inventive, their arrangements are audacious, and their records are decorated with dizzy synthesizer, driving guitar, and kinetic percussion. Their mixing engineer and co-producer – Eric “Mixerman” Sarafin – has been making hits for decades for acts as varied as Foreigner, The Pharcyde, the Brand New Heavies, and Hilary Duff, and he’s matched Moonray with a sound that amplifies the inspirational tone of their lyrics. Sarafin has foregrounded the undeniable chemistry between Barbara and Jonray Higginbotham, amplified their personalities, and put it all on bold display. The rest of the nation is about to learn what dedicated followers of the Austin music scene already know: this is one of the most winning acts around, and their dedication to fun is as irresistible and commendable as their melodies. Moonray brings the party wherever they go – and the moment they can, they intend to take “When You’re Around” far beyond the borders of the Lone Star State.

Anybody who has seen Moonray in concert knows all about their irrepressible sense of play and their exhaustive knowledge of pop culture history. Director Diego Lozano has made a video to suit Moonray’s disposition – one that casts the Higginbothams as superheroes, supervillains, and superstars, all at once. The “When You’re Around” video nods to classic ’80s pop-sci-fi and horror movies and lets its principals run as wild as they want to, which, as all fans of Moonray know, is pretty damned wild. We don’t want to give too much away, but there’s a zombie apocalypse, and a wicked vampire, and a roller-skating rink, and an electric guitar that, naturally, fires laser beams. All of the tropes of ’80s cinema are here, and they’ve all been pleasantly scrambled and rebalanced to provide maximum bewilderment and entertainment. There’s even a beautifully animated sequence that resembles ’80s after-school sword-and-sorcery adventures. Are the cartoon versions of Barbara and Jonray Higginbotham having as much fun as their real-life counterparts? There’s no doubt about it.