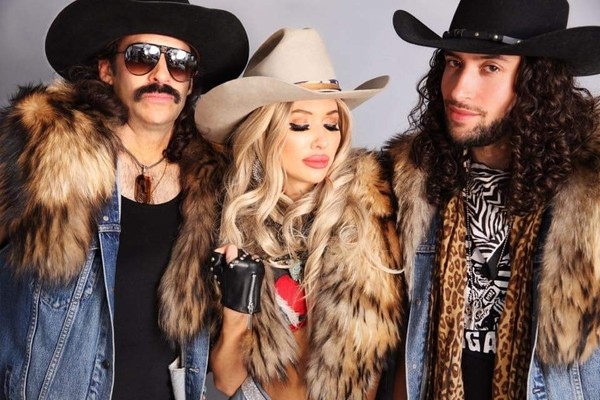 Classic American country has always hidden a truckload of darkness and a whole lot of damage beneath its perfect harmonies and beautifully plucked chords. As musical descendents of the legends that put rockin’ country on the map, The Tennessee Werewolves have made a name kicking out high energy tunes about the low points in life. Angel Mary, Christian Wolf, and Antoine Wolf bring a rebel yell with a Rock and Roll attitude. It’s like walking into an old town saloon and getting kicked in the face with a new pair of boots. The trio took their handle from the unnamed animal in Johnny Cash’s “The Beast In Me,” an iconic tale of struggle and desperation if there ever was one. Having recently recorded “Folsom Prison Blues” with none other than John Carter Cash co-producing, now they’ve got an original single about a very different kind of prison with “American Dream.”

Part rebel yell, part tears in your beer, “American Dream” (Verado Records) is all sharp hooks and jagged edges. Guitars, drums, and Angel Mary’s “fallen angel” pipes – it doesn’t get any more stripped down than this, nor more heartfelt. It was this kind of untamed Southern soul that got them featured in Billboard as part of Nashville’s Next Wave of Country Rock. The lost soul of the track’s verses, alone and afraid, finds her claws when Angel Mary belts out the chorus and the Wolfs drop into a killer Rock groove, complete with big-sky lap steel guitar. “You wanta have a happy life / you wanta be a happy wife / but you’re alone.” The tune tears the roof off as it exposes the big lie behind the even bigger smile of everyone play-acting through their own nightmare version of the “American Dream.”

The Tennessee Werewolves are not happy campers here. Stuck in the middle of an overlong shoot, director Vicente Cordero captures the band killing time in a bar as the crew gets ready for take #-who-even-knows-anymore. The guys play cards while Angel Mary ties one on at the bar, the shot glasses piling up in front of her. It’s go time, cameras are waiting, makeup is being forced upon them — and they’re not having it. The trio goes into full revolt, trashing the set and landing a haymaker on the director. Real-deal rockin’ country has a real short fuse, and The Tennessee Werewolves stay true to their roots and call “cut” for the day. Their “Cowboy” video spent three weeks in The Nashville Network’s Top 10, while their “Folsom Prison Blues” video spent another three weeks in TNN’s Heartland Top 10. “American Dream” is no doubt headed for even more airplay and accolades, as these Werewolves continue to shake the world of rockin’ country up.