Have you ever noticed how musicians are so quick to tell you everything they know? It’s almost as though they only have around three short minutes to bowl you over with their knowledge, so they just have to get to it – and fast. Of course, many artists only think they know it all, kind of like typical teenagers. Such doesn’t happen with Beck Kapell’s new single, though, the aptly titled “I Don’t Know.” With it, she goes to great lengths to tell us nearly everything she doesn’t know about another person. Now, that’s a switch! 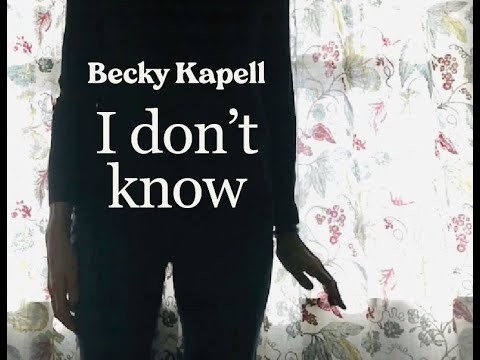 Kapell is a singer/songwriter from Minnesota. But unlike many musicians, who have been playing music their whole lives, Kapell didn’t teach herself to play guitar until she was 42. Not only that, but this self-teaching was done on lark. She didn’t set out to become the singer/songwriter she is, no, she merely figured out how to play your basic guitar chords. Of course, one thing leads to another, and before long Kapell was writing songs.

This newfound songwriting venture eventually led to Kapell’s first album, For Now, which she recorded in Portland, Oregon, a place she resided during her formative years. When she recorded her second album, That Certain Ache, it was clear music had become more than just a hobby. She’s now working with another local guitar player, Paul Bergen. This pairing has led to Kapell playing more guitar-y music, and less of the folk variety. Kapell even has her own band now, The Fat 6, and is fully invested in being a musician.

This new single kicks off with a fluid bass line before some really nice jangly guitar comes in. These guitar elements are accompanied by crisp drumming. Kapell then begins to tell us many of the things she doesn’t know about this other person, including where that one has been sleeping. The chorus is a simply repeated line of “I don’t know.” The second verse admits, “I don’t know what you’ve been smokin’/I don’t know why you’re so broken.” This clearly expresses empathy for this other person’s circumstances, which are breaking him/her.

Toward the track’s end, Kapell begins to ask herself some questions. Such as, “I don’t know why I still wonder.” Eventually, she declares, “I shouldn’t care what you do/But I don’t know how to forget you.” It’s strange how other people’s lives affect ours. We should really only concentrate on living our best life. Nevertheless, there are people in our lives that we simply cannot stop thinking about, and this is one such individual in Kapell’s life.

Kapell sings this song with a sprite, light vocal attitude. She doesn’t seem especially troubled about this person, even though she recognizes brokenness. The music is lovely and might remind you of the folk-rock music in the Sixties. Something special happens when folkish songwriting elements collide with jangly electric guitars, and the sound of this new song is particularly magical.

We should appreciate the fact that Becky Kapell has chosen to tell us some of the things she doesn’t know. Singing about it can be therapeutic. If she’s getting this unknowing out in the open, perhaps it won’t nag her anymore. Whether that tactic works or not, though, I just don’t know.