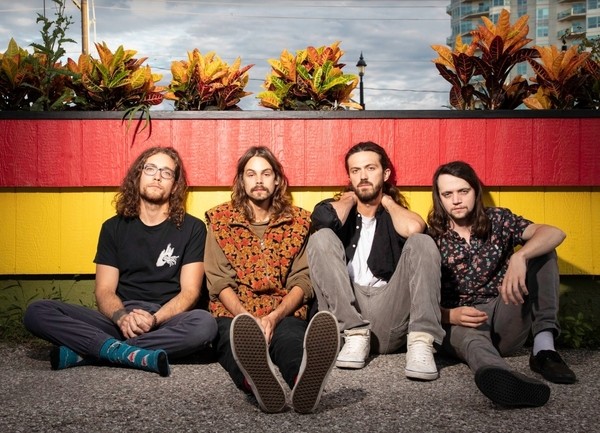 About an hour north of Toronto, another city rises on a different lake. Barrie, Ontario is tighter, weirder, feistier, and more idiosyncratic than its famous cousin, and the town has an alternative music scene to match. Bands in Barrie don’t tend to be captive to fashion – they’re close enough to the big city to be aware of trends, and far enough to feel the liberty to disregard them. No group epitomizes independent music in Barrie any better than Crast, a wiry, dagger-sharp four-piece guitar-rock outfit that pledges fealty to no particular style. Math rock and FM classics, second-wave Midwest emo and progressive metal, ambient music and pure six-string power pop: echoes of all of these subgenres are evident in their sound. But mostly, they’re just themselves – challenging, bracing, intelligent, occasionally caustic, but invariably compassionate and hopeful.

“Swimming,” their newest single – and a standout from the bracing Soundgoods EP – is a three-and-a-half-minute encapsulation of Crast’s complicated and distinctive musical personality. The chord shapes and harmonies are unusual and intriguing; the melodies take unexpected turns; the words are elliptical; the ideas are provocative. Most of all, Crast is distinguished by a calculated disregard for formal songwriting conventions – and “Swimming” makes that boldness manifest. The song eases in with a tightly-written introduction that nods toward soft rock, pivots toward verses that slap with the abrasiveness of punk, climaxes with a breakdown that packs a metallic punch and finishes with a release that feels like something from a lost ’70s classic. Remarkably for a track that covers so much compositional territory, “Swimming” is seamless. Credit goes to the four members of the band, who are each accomplished instrumentalists, even though they don’t tend to call attention to their virtuosity.

They’re also comfortable on camera. Chris Franchetto’s clip captures them in performance, and it illustrates what rock fans in Barrie know well: a Crast show is an exciting thing to behold. It’s become rare to see a singing drummer in a rock group, but Zach Franchetto guides the group effortlessly from the stool, delivering the song with passion, precision, and heartfelt optimism. Yet not all of the action in the clip takes place poolside. In some of it, the musicians are completely submerged. This allows Chris Franchetto to employ some psychedelic aquatic effects, including a purple submarine light that makes the air bubbles look like floating confetti. They’re all swimming – getting where they’re going despite the obstacles, moving at their own place, confident in themselves, at one with the fluidity of their environment.