“Pay attention to what Mother Nature says,” growls Rab Meharg of System Machine on the menacing – but awfully catchy – chorus to “In Dust We Trust,” the latest single from the Northern Ireland industrial and metal band. It’s sage advice, but who among us is heeding it? Mother Nature has rarely spoken as forcefully, or as harshly, to us as she has in 2020. It’s more than likely that we’re all missing a learning opportunity that might hold us in good stead in an indefinite and increasingly terrifying future. 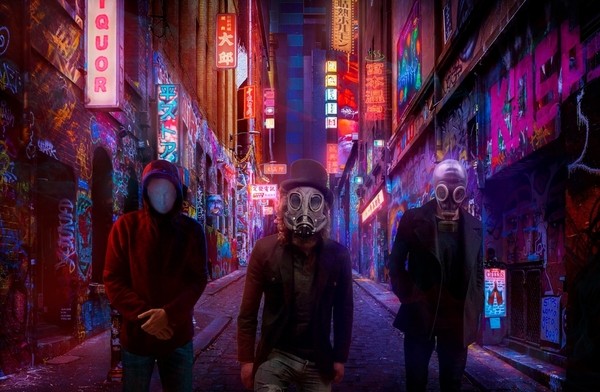 Meharg is listening and watching. Better yet, he’s telling us all what he’s seen. System Machine has always been Meharg’s vehicle for engagement with the outside world – and fans know that the music he makes with the group will be unflinching in its intensity and unsparing in its honesty. No words minced, no punches pulled. Confirm Humanity, the upcoming EP, is ferocious. It’s also socially conscious. Sometimes Meharg expresses himself through tight, epigrammatic, hard-hitting verses. Sometimes he lets the distorted guitars, overdriven synthesizers, and relentless beats do the talking.

“In Dust We Trust” is a fierce reaction to the global health crisis, and all of the discontent, bottled-up rage, and distrust of authority that we’ve all felt over the last nine months are audible in its brutal groove. Yet the sentiment applies just as well to other cases of widespread human negligence. In a world out of balance, System Machine offers a wake-up call – a song that asks whether the way we’re living is sustainable, and wonders aloud whether we’ve got what it takes to adapt to crises. Can human beings make sacrifices for the common good? Meharg doesn’t pretend to know for sure, but in every line he sings, his meaning is clear: we’d better learn how.

The critique is carried over into the stinging clip for “In Dust We Trust.” In it, Meharg and System Machine imagines a representative human being choosing societal values from an app on an iPhone. Reality TV, materialism, social media obsession, and armed conflict – all of these things get the thumbs up, while science, humanity, and humility all receive the thumbs down. It’s a grim picture of our priorities that System Machine is painting, but it’s an accurate one. We can reorient ourselves; we’ve still got a choice. But time is running out.