The band that comes immediately to mind when listening to Cyborg Asylum’s single “No Kingdom,” is Faith No More. This is most likely because of John Tumminia, the duo’s vocalist. He has a near-operatic singing voice, which many times during the track sounds a lot like Mike Patton of Faith No More. Tumminia is the vocalist part of this pairing, as David Varga is its composer/arranger/producer half, handling keyboards and programming. Tumminia, however, is the act’s lyricist. 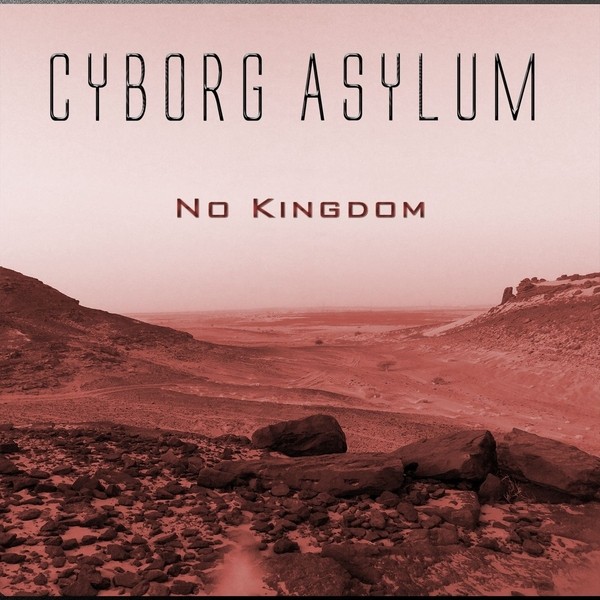 This track opens ominously, with moody music and what sounds like people talking over radio lines. It comes off like communications between NASA and a space vehicle of some kind. Soon, though, an elastic bass part and Tumminia’s vocal enters the mix. Shortly thereafter, the listener hears the percussion come in, which sounds to be all electronic. Tumminia’s vocal, at the song’s beginning, is smooth. However, about a quarter of the way through, he more raps than sings some of the piece’s lyrics.

The song’s chorus includes the line, “No S.O.S.” This leads to the conclusion that, whatever’s happening, it’s a dire circumstance. Tumminia sings its chorus by returning to smoother singing. Only this time, he does so in a higher register and much more passionately.

The band is a bit of a throwback to ‘90s cyber punk music. It’s a genre that draws upon the political activism of punk, which is put to – instead of standard guitar, bass and drums – more synthesized sounds. In Cyborg Asylum, one can hear strong traces of industrial music, as well as harder examples of synth-pop. The band’s name also hearkens back to a time when technology was evolving quickly. It still is, by the way, but there was a period there where a lot of music like Cyborg Asylum’s was warning about the negative impact of impending technology. Technology is great when humans can control it and use it for human flourishing. However, there was – still is – a lot of fear about how much control technology can have over humans. Yes, you can laugh at the antiquated robots seen in old Twilight Zone episodes, but the robots of today look less scary, but can also be much more harmful to real people. Things like artificial intelligence and robot manufacturing can mean the loss of jobs for a lot of workers, for instance.

It’s not entirely clear what ‘kingdom’ Cyborg Asylum is singing about here. Kingdoms are not something modern people usually think about. When we think about kingdoms, we think of Old Testament Jewish rulers, or TV period pieces. We don’t think much about modern kings, unless we’re followers of England’s royal family, which right now has a queendom, instead.

While this music is retro (although relatively recently retro), it’s a reminder of a time when music had more meaning and content than much of what’s released now. It’s certainly the sort of music that will make you forget Cardi B’s “WAP” pretty darn quickly, and that’s certainly a positive forgetfulness. Therefore, this song probably won’t knock Cardi B and Megan Thee Stallion off the top of the pop charts. Instead, it provides plenty of food for intellectual thought.