Five-piece bands have a special place in the history of rock n’ roll. Two guitars, a bass, drums and a powerhouse lead vocalist – it’s a combination that can’t be beat, and for Moon Fever, it’s the right setup to produce some of the smokiest alternative rock I’ve listened to in a long time. Their new single “Shaking Off The Evil” and its music video are stirring up a lot of attention in the American underground this summer, and it doesn’t take much more than a single viewing of the video to understand what all the fuss has been about. In a season that hasn’t had a lot of electrified thunder to write home about, Moon Fever have come to play with the big boys and raise the standard for an entire scene. 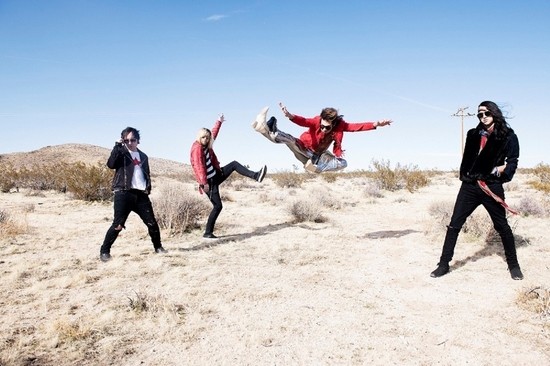 There’s just as much emphases on the guitar parts here as there is the vocal, and while the balance yields a liberal harmony, I think this was important to produce a sense of sonic duality nonetheless. I haven’t had the chance to review a lot of mainstream rock this summer, mostly because of the major label lull that we’ve collectively experienced over the last six months or so, but even most of the indie acts I’ve been listening to have failed to match the multilayered attack this crew is employing for “Shaking Off The Evil.” They’ve got a very cohesive game plan, and it’s being put into use perfectly in this third official release.

The music video for “Shaking Off The Evil” has a very gritty, esoteric feel to it, exquisitely reflecting the moodiness of the melodies in the background and extending the narrative into a visual experience. There’s so much surrealism in videography anymore, and while I enjoy a cerebral, Tool-style piece as much as the next person, I can’t say that a clear-cut effort like this one doesn’t feel really refreshing to come by in 2020. Moon Fever aren’t trying to dazzle us with a lot of pricy bombast in this work; they’re instead focusing on the bread and butter of their sound (and coming off as being a lot more mature, honest and endearing because of it). I like the attention to detail, and nowadays I can’t think of any critic who wouldn’t.

I wasn’t really aware of who Moon Fever were before getting turned on to their music just recently, but for what “Shaking Off The Evil” tells me about their sound, I think it would be safe to rank them among the smarter rock groups to emerge from the underground shadows this August. They’ve still got a long ways to go and more than a couple of rough edges to sand down before they can make a legitimate play for the mainstream, but in this moment in time, I don’t know that any of their peers are throwing down quite as melodic a riff as these guys are in this release. “Shaking Off The Evil” is a great listen, and overall, I fantastic way of meeting Moon Fever.