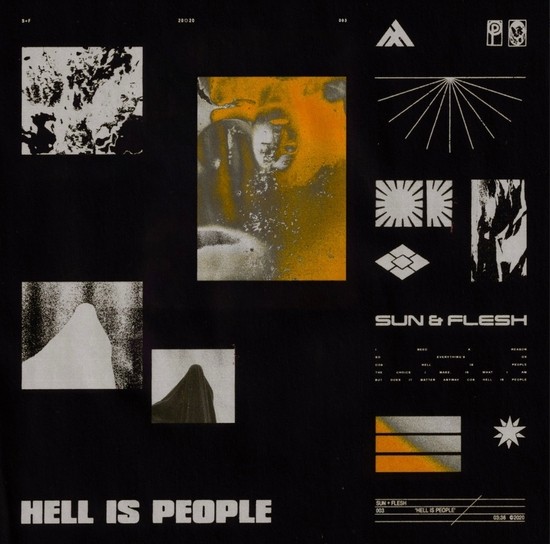 It was French philosopher Jean-Paul Sartre who, in his existentialist play No Exit, first postulated that hell is other people. Well, that condemnation isn’t sufficient for Brooklyn hard rock band Sun & Flesh. Frontman Christoph Manuel doesn’t stop where Sartre does, and he doesn’t exclude himself from the excoriation. To Manuel and Sun & Flesh, hell is people, period – all of us, without exception. And in the video for “Hell Is People,” the band’s latest single, Sun & Flesh craft a “no exit” scenario of their own, and one that anybody who has ever been in a band will surely understand.

Many hard rock bands sing about the furnace. They’ll allude to hell, encourage deviltry, and employ diabolical imagery in their clips. But not too many of them think about what it actually means. In “Hell Is People,” Sun & Flesh give us something truly infernal – not a caricatured devil with a pitchfork, but close quarters with others, and confinement with our own bad habits. Manuel’s lyrics are unsparing and frank, tough-minded, clever and incisive, and they leave no doubt that he’s carefully weighed every word and considered their implications. And as always, his band has backed him up with ferocious music: hard rock that draws inspiration from industrial music, adventurous metal, the best of ’90s alternative, and maybe even contemporary pop, too. Jonathan Serwinowski supplies the manic kick drum flurries, Matt Brewster delivers the molten bass riffs, and the effortlessly imaginative Stefan Reinberger demonstrates his guitar chord vocabulary and his knack for novel and ear-catching harmonies and countermelodies. Like all great hard rock bands, Sun & Flesh is a unit, with each member enhancing the strengths of his bandmates.

“Hell Is People” follows right on the heels of the equally searing singles “Dig In Deep” and “Bored”: this is a band with energy and ideas to burn, and they’re already well on their way to building a deep catalog. Both “Dig In Deep” and “Bored” were accompanied by expressive videos, but Sun & Flesh has upped the ante this time around. It isn’t just the demonic imagery digitally superimposed over the performance footage, although that’s certainly devilishly delightful. It’s the surprisingly good acting by the band members, who are trapped with each other’s idiosyncrasies and tics, and must do their best to control their annoyance and seething rage. Sartre – and anybody who has ever spent time in a touring van – would surely nod in recognition.