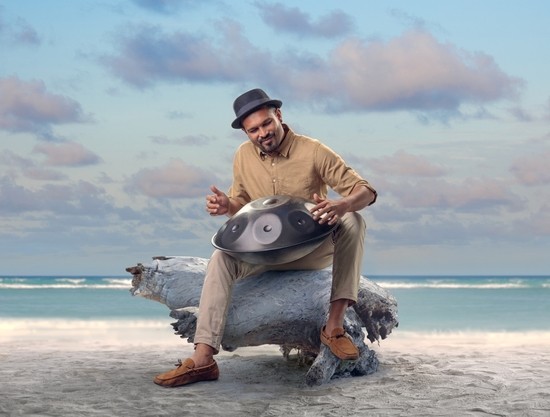 It can soothe, it can inspire, it can tease, it can invigorate. It is, quite literally, a generator of tropical vibrations – but it’s ideal for creating a sense of chill. Sometimes it’s reminiscent of a steel drum and sometimes you’ll be sure that the sounds it makes are coming straight from the deepest, strangest circuits of an old analog synthesizer. The handpan is one of the world’s most distinctive and unusual musical instruments, and percussionist Faizan is nothing short of a handpan master. From the flying saucer on his lap, he coaxes sounds of eerie beauty, harmonic richness, bright clarity, and, on occasion, striking intensity.

His virtuosity on the instrument has made him one of the most recognized and celebrated handpan players in the world. “Hang In There,” his first clip, has been viewed thousands of times across Internet platforms, and it was counted among the “Best Handpan Videos of 2016” by the Didge Project. Yet his expressiveness and his musical imagination are by no means limited to the handpan. Faizan also plays with the progressive rock group Skyrock, and he’s tried his hand at classical, electronic, and new age music, too. “Aether,” his breathtaking single, is a collaboration with the Romanian composer Xenti Runceanu and the Amadeus Electric Quartet, a string group of uncommon daring and international acclaim. The members of the Quartet have drawn fans of classical music and contemporary pop alike to their YouTube channel, and their videos have been viewed more than 120 million times.

A song as radiant as “Aether” requires a clip of comparable majesty. Faizan hails from one of the most gorgeous corners of the planet: the Maldives, the idyllic tropical archipelago in the vast, calm expanse of the Indian Ocean. The “Aether” video takes the viewer to the Saii Lagoon Resort on a remote island divided from the international airport by ten miles of crystal blue water. That water is one of the stars of the “Aether” clip: Faizan is framed by the sea as he plays his handpan on a day of postcard-perfect beautiful weather. Fire, air, and earth are all represented, and each of the members of the Amadeus Electric Quartet is presented as conjurers of cosmic forces. The message is clear: music as balanced and harmonious as “Aether” doesn’t happen unless all elements are in sync.