It is impossible for me to dislike this song. I knew from the beginning, when the slinking groove kicks in, that this single “Buddha” would win me over. Elz Bentley’s vocal style sealed the deal as words and images began rolling out of him, bouncing with the rhythm, darting, ricocheting through my head. He knows how to shape his voice around a killer groove and feed off it while never attempting to dominate the song. There’s little question in my mind Bentley has the skills to take over any recording he performs on, but even listening to this track once or twice shows he’s far more concerned with producing a well-rounded musical experience. 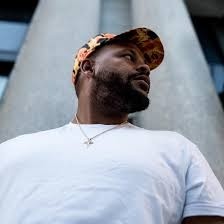 The Lexington, Kentucky based hip-hop artist doesn’t have a long discography to his credit, he’s basically just getting started, but you’d never know that listening to this track. There’s a level of assertiveness working through this song that you would typically ascribe to much older, more experienced performer. You can hear it in the cool confidence Bentley radiates throughout each line of the song. He has nothing to prove; he lays out the experiences of his life with a firm grip on the nuts and bolts of who he is as a man and never backs off from that. You can, likewise, hear that confidence come through in the way he plays with the trajectory of the vocal, the way he riffs with its rhythmic properties, and how they invariably fall into lockstep with the musical arrangement.

The combination of electronic drumming, bass, and synthesizers works exceptionally well here. It’s true that pre-programmed percussion can often have a lifeless snap, but it is more the rule than exception years ago. Technological advancements have left a quantifiable impact on an assortment of areas in entertainment, music being one, and successive generations have proven themselves extraordinarily capable of developing electronic instrumentation in creative ways. Elz Bentley’s “Buddha” proves that point.

It would all fall flat if it wasn’t for Bentley’s talent for telling a story. We are taken inside his world during this track in hardscrabble fashion rather than courtesy of assorted bells and whistles ultimately not mattering much in the larger scheme of things.  His vocal approach is a study in contrasts. There’s a near blasé superficial tone of indifference in his voice throughout the track, but you must take the lyrics and tone together as a complete package to understand what Bentley is attempting to accomplish here.

“Buddha” is further proof that Elz Bentley deserves his spot in the constellation of homegrown stars emerging throughout modern hip-hop. He isn’t some glorified tribute act to his past betters but, instead, stamps his identity on everything he touches thus far. It is likely the sheer force of his personality could win listeners over, I believe, but his new single has considerable musical value as well. I have full confidence this talented young performer will continue blazing his own trail and recommend we join him for the ride ahead. Based on tracks such as this, we’re in for quite an experience in the years to come.