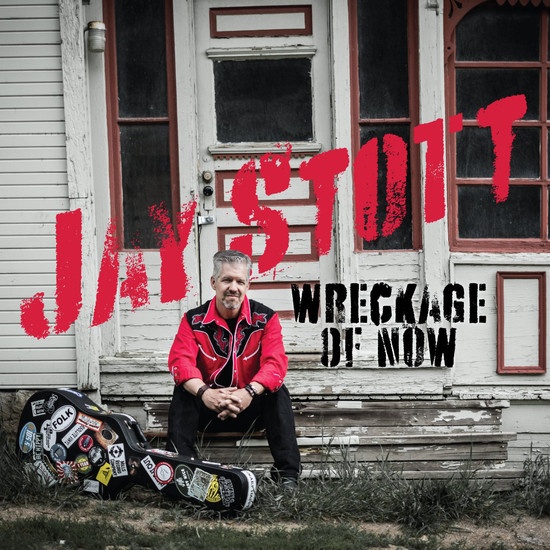 Jay Stott is a high school English teacher by day, and a rock & roller by night. He’s even been said to bring his guitar into class at times. Chances are good, though, that one of the songs he doesn’t do for the kiddies is “Wreckage of Now,” the title cut to his new album. Within its lyrics, he confesses to drinking and drugging. Of course, this may be Stott observing the behaviors of others, rather than himself. Nevertheless, snowflake kids might be troubled by its lyrics. With that said, though, the instrumentation on it includes bluesy slide guitar and old-time rock & roll saxophone You might say he’s giving us a class on how to best do classic rock & roll here.

As you might have already guessed, Stott likes his rock & roll vintage. He may be a modern guy, but he obviously likes his music to sound like it’s coming out of a Happy Days’ jukebox. With that said, though, not everything on this album is sock hop ready. Take “Desert Heat,” for a counter example. Like a cowboy riding off into the sunset, Stott sings its lyric over a clip-clopping horse trot electric guitar rhythm. The song’s sound matches its hot weather-centered lyric. Nevertheless, Stott returns faithfully to that old-time rock & roll with “Can’t Stop Love,” which rollicks to an enjoyable Bo Diddley groove. That popular rhythm has been applied to rock songs for years, yet never seems to get old. In addition to is rhythmic guitar part, the track includes nice organ and piano supporting Stott’s singing. The song praises, in so many words, the unstoppable power of love. Even a high school teacher like Stott, who must spend his days with modern day high school students, is still a strong believer in love. That’s encouraging.

One titled “Electric Guy” is a slow, slightly sad country song – at the start. It includes plenty of warm fiddle. It also has a false start, because after the short fiddle tune, the song restarts again as a romping rocker. Stott likely enjoys bluegrass music, but he’s a little like a fish out of water in his town. He’s an amplified guy, who feels a little of Bob Dylan’s pain. You may recall how Dylan brought an electric band to play a folk festival – The Band, in fact – where someone in the audience called him Judas. Stott is in no danger of being labeled a Judas; we’ve come a long way since the acoustic folk revival that initially gave Bob Dylan his start. Nevertheless, Stott realizes his love of rock & roll goes against the style-of-choice in his community. It’s only rock & roll, but hey, he likes it.

If you listen to oldies stations because you don’t like a lot of what’s on modern radio, Wreckage of Now by Jay Stott may be the right fit for you. No, he doesn’t cover any of those old songs. However, his originals sure sound a lot like those oldies but goodies. He skillfully plays electric guitar and sings with sincere feeling. For many, his songs will sound a whole lot better than the sonic wreckage of (music) now.