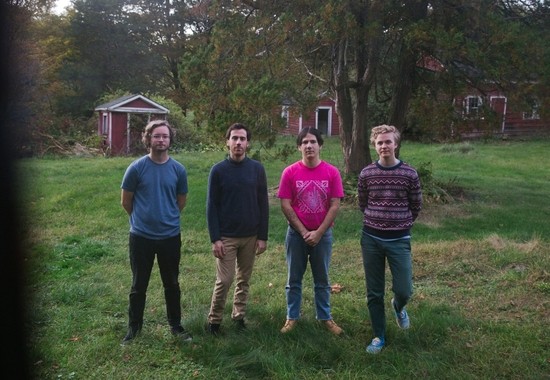 A great record is one that could’ve come out 20 years ago, or 20 years from now, and still fill music halls with fans who yell every word. By now, New Jersey’s Pinegrove has put out three of those, Marigold being the latest. Pitchfork nailed something pretty essential to the Rough Trade Records four-piece, calling Marigold “An intense work about one of the most important things imaginable: how to make our friendships really matter.” Pinegrove’s unflinching exploration of human interaction and community extends beyond the music. This is after all, a band who expressly encourages reimaginings of their songs, going so far as to provide guitar tabs. There’s an honest uncertainty in Pinegrove’s observations, but there’s no hesitation to be heard in their from-the-heart guitar rock. Only sing-along choruses and melodies steeped in Americana and the most indelible 90s mainstays like Buffalo Tom and Built To Spill. The video for “Endless” is being released alongside the extended re-issue of Marigold, an album that rated 4 out of 5 stars in MOJO and an 8 out of 10 in UNCUT.

“Endless” finds its shambolic, mid-afternoon indie swing immediately, and gets right into a “you and me both” show of empathy. The roomy slide guitar and subtle, simple melodies recall the mood and longing of Billy Bragg and Wilco’s interpretation of Woody Guthrie’s “California Stars.” Singer-songwriter Evan Stephens Hall says of Marigold, but could easily be speaking of “Endless” in particular, “it’s about how to keep going, and to respond to the world as it is right now.” The days aren’t great, and the nights are worse, but, hey, it’s better than feeling nothing at all, right? He and his bandmates have pulled off a song here that feels less like you’ve found an amazing band, and more like you’ve found your people. It’s always cool to discover a band like this through a song like “Endless.” It’s even cooler to find a band who are continually discovering themselves.

A lone yellow seed clings to a bare winter branch, ultimately losing its grip and dropping into a freezing stream. After some time spent seeing the world through a crust of ice, the thaw and current send it on its way. It endures ups, downs, swirling eddies, and rapids, only to be tossed ashore. Director Brian Paccione said of making the video, “I learned to listen to [nature], respond to it, and collaborate with it. I was not in charge.” A faceless stranger wanders the woods, crosses paths with the seed, and… then what? What’s our seed’s fate? Does it become the sprout that briefly flashes across the screen? Or is that it right there, passing from view, taken by the waters once more? The clip is about “…tenacity & endurance of spirit,” says Hall. “In this moment of turbulence in our country, we believe in the power of resilience and perseverance. Keep going. It’s working.” So either way, the seed’s just rolling with it, probably not all that concerned. We could all learn a lot from that little seed.