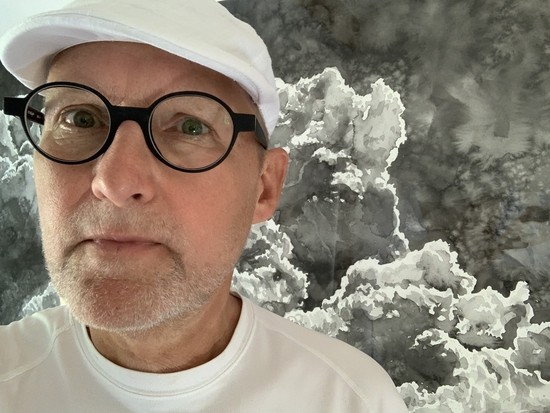 For some, exploration is like oxygen. Sonarpilot, earth name Michael Moppert, has been drawn to envelope-pushers, risk-takers and boundary-exploders since the space travel heyday of the 1970s. Rock iconoclasts like Bowie, Pink Floyd, and Roxy Music. Electronic pioneers like Tangerine Dream, Kraftwerk, and Eno. To Moppert, these were astronauts disguised as artists. He made it his life’s calling to first follow their footprints, then leave his own. What began with a guitar, a 4-track, a battered drum machine and a single analog synth morphed over decades into a fully-operational recording studio. All the while, his musical output went from punk-inflected Rock to increasingly technoid, ambient and experimental music. The tail end of the 00’s was the dawn of a new era for him, a new name, Sonarpilot, and a new mission, his most ambitious ever. The Mirage Project. So what is The Mirage Project? A collection of six stunning and unique fractal films with bespoke electronic soundtracks, appearing monthly online from May to December. “Fossil” is the second audio/visual piece to be released, coming one month after “City In The Sky” ushered in this sonic sci-fi opus.

The year is 2020. A 2020 spun from another timeline. A year spent gazing outward, not withdrawing inward. Humanity watches transfixed as Deep Space Mission Probe “Mirage 2” does a breathtaking fly-by maneuver on an interstellar object that has entered our Solar System, the first of its kind in recorded history. “Fossil” provides a 10-and-a-half minute soundtrack that matches perfectly. Synths flare and skitter across a pulsing, ambient beat, like the heat and light signature of a far-off star. Sonarpilot takes his time building the sound of the strange, hypnotically beautiful parallel universe from which this object originated. The chips and circuits of electronic instruments are utilized here to reveal undiscovered forms of life that may be alien, but sound and feel incredibly human.

Sonarpilot created each of the videos and their soundtrack in cooperation with film producer Roger Mäder. “We were using software that generates highly complex fractals. Some of the formulas took a week to render one minute of video,” Mäder explains. Once he generated the raw visual material for each song’s world, Moppert would edit the footage and, at the same time, write the music. The results are extraordinary. In “Fossil,” shimmering skeletal arches and caverns repeat and repeat, networking in endless geometric patterns like an HR Giger panorama. Like all great sci-fi, the power of the video lies in the suggestions it makes with its eerily organic architecture. Everyone will arrive at their own conclusions as to what they’re witnessing — and that’s the point.

The song and video that launched the story of The Mirage Project, “City In The Sky” is an awe-inspiring introduction to the epic series, another perfectly matched immersive experience. The icy synths and vocal fragments ascend and bubble ever upward through a layer of reverb, along to the muted thump of the beat. It commands the eyes to look up, at the video’s Cubist crystalline cityscapes, unfolding and blossoming infinitely in the stratosphere. As breathtaking as it is, it’s meant to be a mirage about the impermanence of even the most technologically advanced societies and their material achievements. These skyscapes mimic Earth’s urban constructions, but here gravity is optional, and beauty is not. It’s something the Borg might travel in, if they were better neighbors. The song itself is a journey, every measure and modulation guiding the listener deeper into the narrative and the world Sonarpilot has created out of thin air.