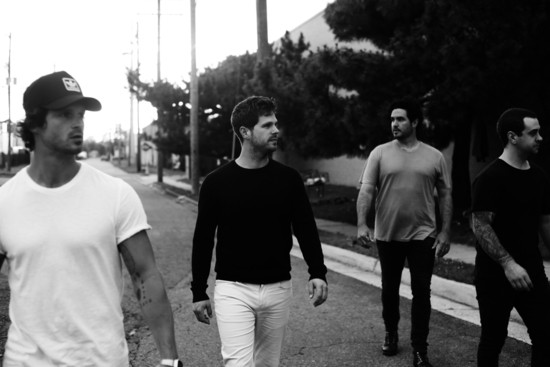 There’s a hell of a lot to get out of the way when you start a band. Who gels with whom, who’s really filling which role, and what path is it all leading down? Ok Mayday, friends (and a couple of brothers) for decades, were able to get right to the good part: writing catchy, fully-realized, soulful indie that stands apart. The Virginia Beach four-piece crafts tunes from the most basic rock elements that are instantly resonant and immediately relatable. There’s a shy pop intimacy at the heart of Ok Mayday that makes their hopeful, rhythmic compositions that much more powerful. They’re able to capture that elusive, authentic something that hides between analog’s imperfection and the beautiful sheen of modern production. Their latest single, “Blossoms,” defies category, except to say that it’s a perfect summer soundtrack.

The best songs are the perfect getaways, a momentary escape from whatever headspace or actual space you’re in. “Blossoms” is a heady, weightless rush of synths, oohs, ahhs, and David Bollmann’s dreamlike, effortless, almost euphoric croon. The track wanders deftly through chorus and verse, celebrating a profoundly heavy subject, without getting too heavy about it. Here’s to the astronomical chances of blundering into love, the wonderful surprise of realizing that this thing you have, this thing you share, is still as alive as the day it began kicking. Bollmann, his brother Kelly, Stephen Lee, and Matthew Osborn build up and strip back the layers throughout, never losing the pulsing, shuffling rhythm. “Blossoms” isn’t about romance; it’s just a tune about love, played by a band that knows how to write a song that stays with you.

“…And though we were apart, we created this together.” So begins the inspired and inspiring video for “Blossoms.” Originally intended as a tribute to the love between two people, the concept rapidly adapted – as did we all – with the onset of you-know-what. The band reached out to fans, friends, family, and fellow musicians around the world for some day-in-the-life footage. The guys cobbled together dozens of clips of folks dancing, playing, working, eating, skating, making masks – all acts of love, proof that we’re all with each other even when we can’t be in the same room. All the while, the band Zoom it in, performing the song even as their own lives go on around them, a band who knows that music is even more powerful than a pandemic.