With a subtle click, “Dream Symposium” begins to unfurl its collection of beats with a hesitant sway. That very sway will soon grow into a beastly wave as we continue on here, in the opening song of Toronto Tabla Ensemble’s new album Unexpected Guests, but as we’ll learn in its tracklist, this record is full of surprises bigger than this one. “Dream Symposium” is followed by a bold title cut that features nothing less than bagpipes as its melodic catalyst and lives up to the fireworks of its music video incredibly well. “Maryem’s Here” brings us towards the midway point of the LP without even hinting at the brawniness to come in Act II of this unparalleled new offering, but it also doesn’t let anyone down in terms of sheer melodic and rhythmic might. 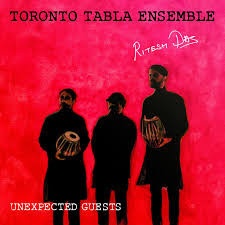 “Toronto Tabla Youth Ensemble” is smackdab in the middle of Unexpected Guests, and in some ways it feels like a bridge from the relatively moderate performances of the first half here to the unadulterated experimentations of the second. Ramping up the tempo and occupying every inch of the stereophonic airspace around us, this song bleeds directly into the nine and a half minute opus “Monkey Tale” without missing a beat, leading me to believe that the two were probably composed together (perhaps in an unplanned medley) during a freeform jam. Toronto Tabla Ensemble definitely have the muscularity to accomplish such a feat, and if that wasn’t known before, it will be now.

“What’s Going On” turns up the heat on us with a dark harmony and electronic components that eventually produce a guttural metallic riff in the center of the storm. You might find this to be the most complex and interestingly attractive song on the record the first time you sit down and listen to the tracklist from beginning to end, but once “Raghupati” comes into focus, you could change your mind. Unexpected Guests wraps up with the sitar/vocal showcase “Raghupati” and leaves us with a potent and entirely unpredictable conclusion to what could be one of the more versatile indie LPs out this July, and though I was hesitant to admit as much at first, I do believe this record is a grade above what the American avant-garde scene has been enjoying recently.