Hereami’s “Flow State (mix. 7)” is the sound of one man’s search for peace. It’s a slow track, with a sparse musical backing. The song’s title may refer to what positive psychologist Mihály Csíkszentmihályi refers to as an “optimal state of consciousness.” This is that mental place where we feel and perform our absolute best. It’s the ultimate focus on whatever we’re doing, where we are at our most involved. Hereami mentions the late Kobe Bryant’s mamba mentality in his lyric. In nature, the black mamba is the second longest venomous snake, after the king cobra. It’s been said – and quite truthfully – that Bryant had that mamba (or killer) instinct. When he was determined to, say, make the game winning shot, nothing and no one could get in his way. We’d all like to have that sort of mindful thinking approach. Of course, none of us can replicate what Bryant did because – although we may very well achieve a flow state – Bryant had more innate basketball skills than most everyone else on the planet. However, he also had a stellar work ethic. He was always working on improving some part of his game. That’s something everybody can develop. Everyone can work on some part of their ‘game,’ even though they may never be the most skilled at what they do. 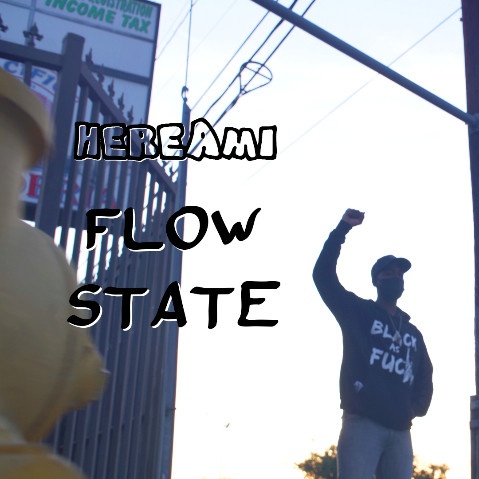 Ironically, Hereami doesn’t necessarily sound like someone attempting to achieve a flow state. There isn’t any sort of Bryant-like intensity in his voice. Instead, Hereami comes off extremely relaxed. Can someone be this chill and in a flow state? This seems unlikely, but Hereami sure appears like he’s trying to do ‘the improbably,’ and quite possibly, ‘the impossible.’ Musically, Hereami is also a good singer. His singing voice is heard on this track’s chorus.

The song’s video focuses the camera on Hereami walking along SoCal city streets He’s seen wearing a sweatshirt with the words “Black as Fuck.” The video also works in black protest footage. Although this racial justice content is timely, it doesn’t always match the song’s original intent. For instance, if you listened to the track multiple times (as I did), and then watched the video for it, you might find yourself scratching your head and wondering why the video was made this way – with images of protest. The video also features Vazen, in addition to Hereami.

There’s a verse in the song that speaks about internet social media activity. Granted, social media activities can be problematic, but these activities are not nearly as important as the current black lives matters protests. It almost seems as though Hereami added this activist content at the last minute, to appear current and more relevant.

With all this said, though, Hereami has created a strong, memorable single. It’s striking for Hereami’s honesty. Hip hop artists have been known in the past to create alternative personas, almost as if they were musical superheroes. Hereami, in contrast, is open about his real life, with his real-life struggles. Such vulnerability is admirable. He doesn’t have everything all together, and that’s okay. Listening to this song, the listener might say, ‘Hey, I, too, don’t have everything all together. I’m not alone.’ That’s how Hereami’s music can have a positive influence. There’s the Kobe Bryant flow state, and then there’s the work towards achieving a flow state, and this latter approach best describes Hereami’s track.

Short Bio/Credits
Flow State was written by Shawn ‘HereamI’ Dunbar, and features Michael ‘Vazen’ Vanasek, Hereami’s long time collaborator, who also produced the music to this powerful track. Hereami along with Jason Ho of Dream Nineteen Productions, directed the making of the music video, which was shot in Los Angeles as a way of peacefully protesting the racial injustice in society, and releasing anxiety that has risen from recent and past events.