The Insufferable Paul Scott titles his new four-song EP Radio Station. The title song’s chorus finds Scott declaring, “You’re my radio station.” Presumably, Scott is talking about a girl via this declaration. But maybe not. Whatever the case, some of the song’s lyrics may not make sense unless you’re an alternative music fan. For instance, he sings “Land speed record at the Zen arcade,” at one point. What the heck could that mean? Nothing, unless you recognize that these ae two Hüsker Dü album titles. Rather than specifically personifying a girl as his radio station, this song is more like a litany of Scott’s favorite music, one presumes. It’s unlikely this is a real radio station, however, because many of the acts he namedrops with it, received little radio airplay in their heyday – unless you’re talking about college radio. Nevertheless, many will gladly tune into any radio station that plays, say, Joy Division and Hüsker Dü back to back. 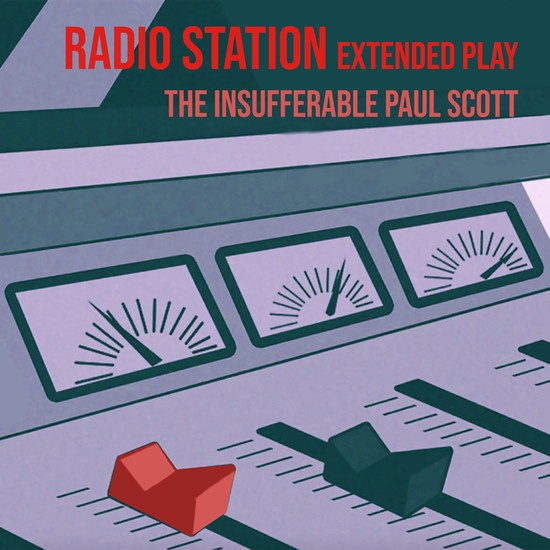 Sonically, this title track is built upon a groove intended to sound orchestrated, even though no actual orchestra was used in its creation. Scott sings it in a low voice during the verses, then raises his register for its chorus. Although its lyric doesn’t tell a linier story, it is nevertheless an endearing collection of impressionistic observations.

With “Chasing Shadows,” Scott gives us a pretty, moody piece. Once again, he makes it a little difficult to decipher exactly what he’s singing about. Scott is at his most instrumentally aggressive on “The Collapse.” The latter features a pronounced bass line and synth groove.

This project closes with “A Golden Calf,” which is much quieter than everything that precedes it. Scott sings over a gentle rhythm that prominently features picked acoustic guitar. While Scott sings it in a sweet voice, the song’s lyric speaks about looking for some sort of golden calf. If you remember your Old Testament Bible stories, the Israelites created a golden calf by melting their gold jewelry and creating an idol because they were becoming impatient with Moses. During its chorus, Scott sings about “Looking for a new direction,” before adding “Looking for a golden calf.” It suggests a culture restless for answers to big questions, whether these answers are true and correct, or not. The Israelites were portrayed as acting foolishly in this Biblical account, and Scott appears to be drawing a parallel between those old fools, and today’s modern-day fools.

If The Insufferable Paul Scott was, in fact, a radio station, rather than (or in addition to) being a musical artist, he would be well worth turning on. He creates songs that are simultaneously melodic and curiously intriguing. Radio Station is a quartet of pop gems that will have you coming back to it again and again. He comes off as the kind of guy that’s done a whole lot of radio listening during his lifetime. He’s soaked this all up and filtered it through his unique point of view. Sadly, you won’t find this same music quality on modern radio stations. Scott’s music hearkens back to when the radio was still cool. Therefore, you can make radio listening cool again with The Insufferable Paul Scott’s delightful EP.