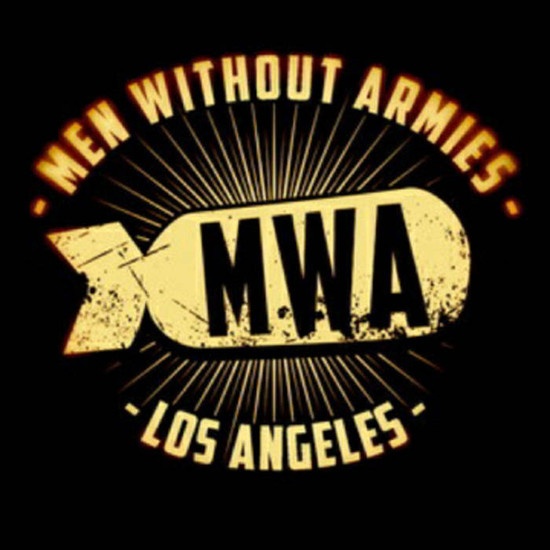 With the loud, GIANT sound being created here, it is hard to believe that the cohesive unit on this six-track recording consisted of just two members: Brennan Dylan on guitar and Johnny Burke on drums, vocals and engineering. It’s also worth noting that Brennan Dylan produced and composed all the music parts while Dude Diablo wrote all lyrics on the EP. Together, this is a Rock ‘Em, Sock ‘Em force to reckon with! Rock, metal and Neoclassical collide to make up a ferocious sound that is fully ‘Strapped & Loaded’.

Right out of the gates, Brennan Dylan & company are blazing the trail with one fierce performance on “The Desert Haunts Me”. Next, Men Without Armies welcomes you to “The Gun Show” where they are firing off rounds of high energy and stellar guitar chords & riffs. The title track is fully-equipped with its rough, rugged and raw approach. Men Without Armies is ready to set the stage on fire with “Strapped & Loaded”, so come and get some! The following song has Brennan Dylan and Johnny Burke grabbing Rock by the balls on “Crash ‘n Burn”. On track five, “Fast Life in Hollywood”, the listener gets a heavy dose of the live hard, play hard mentality where all rules are thrown out the window. Men Without Armies finishes the 6-song set with a mighty force on “A Day in The Life” where direct, relevant and thought-provoking words can be heard such as: “Fearless we live, fearless we fight, fearless we die”.

Men Without Armies leaves with you plenty to chew on with their EP giving the audience an all-out rock fest. With Brennan Dylan’s dynamite guitar playing, Johnny Burke’s powerful vocals and Dude Diablo’s timely lyrics, one will want to march right alongside Men Without Armies. ‘Strapped & Loaded’ is a pure adrenaline rush buzzing by your ear lobes, so prepare to be blown away!