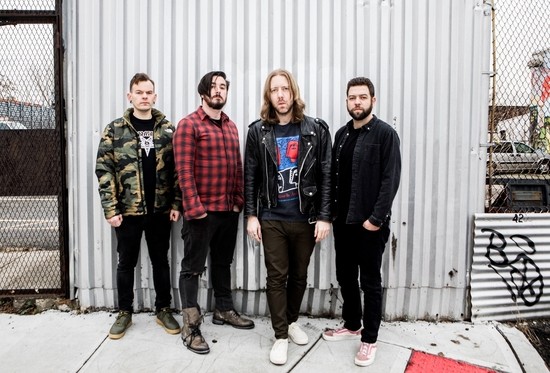 Being a metal band in Brooklyn, where everyone lives on top of each other, and drivers hate the pedestrians, who hate the bikers, who hate the drivers, the aggression embedded in the genre’s DNA can go one of two ways. You can hate every other ant in the ant farm, or you can rise above and blast furious anthems of disenchantment that speak for everyone. And that kind of empathy is a hell of a lot more metal than a permanent middle finger. Don’t misunderstand; there’s anger in Sun & Flesh’s music, a pit’s worth and more, but it’s focused, given voice through bruiser riffs with unexpected atmosphere and melody. Sun & Flesh smash up the ground rules of metal’s salad days with the farther-flung influences of the 90’s resurgence, to forge records that promise to live fast, and die never. Metal Injection is already on board, and no wonder: these guys are doing it for real, living in the van, fan by fan, cranking out life-threatening rippers like “Bored.”

If this is boredom, Sun & Flesh have weaponized it. Producer/engineer Dan Korneff (Breaking Benjamin, Papa Roach, Killswitch Engage) has given the track a killer brilliance that leaves every bit of abrasion intact. Every thwack, rumble, bark, and roar catapults from the speaker with all the abandon and fury of a live show. Throughout “Bored,” the band’s dynamics, harmonies, and mood shifts recall Deftones at the height of their power. The track’s breakneck churn switches up halfway through when they flip a schoolyard chant on its head. And may Baphomet help you if their finger lands on you when they get to “miney… moe.” In “Bored,” Matt Brewster, Stefan Reinberger, Jon Serwinowski, and Christoph Manuel have locked in a perfect calibration of heart, smarts, and all-out assault.

“Bored” establishes its grim worldview immediately, opening on some pretty dystopian news and infomercial footage. People walk the streets and go about their day oblivious to their surroundings, faces buried in their phones. They are separate from the world around them, zombified by constant news reports, info aggregators, consumer goods sites. Instead of interacting, they absorb a steady flicker of data and info, bathing their unblinking eyes in a cold blue LED wash. The band is in a world of their own as well, tearing through the song in a bare concrete warehouse. Manuel and Brewster pulled double duty here, conceiving and directing the clip. They create an ominous juxtaposition of a band giving it all the blood and sweat they’ve got, while right outside, their fellow Brooklynites wander numbed to the good, blind to the bad, locked inside their own heads.