On both the runways and on the streets, hanbok is taking the spotlight as the newest in haute couture and street fashion. Worn today as a mix between the cultural and the modern, the hanbok is traditional Korean attire for women, men, and children. 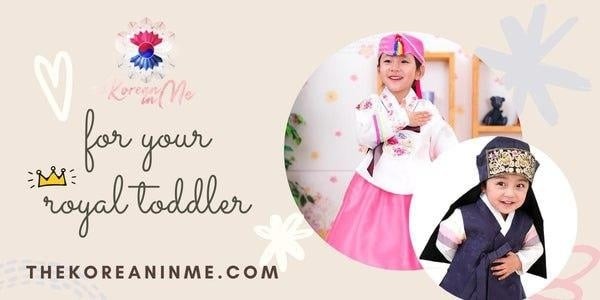 The hanbok for women consists of a large piece of fabric tied at chest level, forming a long skirt, and a jacket. This set is often called “chima-jeogori“, “chima” being the Korean word for the skirt and “jeogori” designating the jacket. The hanbok for men consists of a short jacket and pants, called “baji“, loose, but attached to the ankles. These two sets can be worn with a long unisex cut coat, called “durumagi“.

The traditional hanbok that we know today is inspired by the models worn during the Joseon dynasty (1392-1910). In this society predominated by Confucianism, the aristocrats, the “yangban”, displayed their social authority and status through their clothing. They wore a hanbok of light colors in silk, plain or printed with patterns during the cold seasons and a hanbok in ramie canvas or in light finely woven fabric for the hot seasons. On the other hand, the people were restricted both by law and by financial means to wearing a hanbok in discolored hemp or cotton. Only discreet colors were authorized such as white, light pink, light green, gray, charcoal black, etc.

The first kings of the Joseon dynasty made New Confucianism the dominant ideology of that time in Korea. The dogmas of this new movement imposed a drastic conformism and everyone had to be recognizable by their dress style, especially at weddings and funerals. Integrity for men and chastity for women became fundamental values of the society of the time and in everyday life, clothing habits had to evoke them. For everyday wear, the hanbok was designed to allow ease of movement for the wearer. For ceremonial use, the hanbok was designed to be regal and represent different motifs in nature in its embroidery and design.

The beauty of the hanbok

The beauty of the hanbok lies in the harmony of its colors and the simplicity of its lines. Most “jeogori” have two long ribbons to support the garment. These ribbons are tied at the level of the sternum and form a knot called “otgoreum“. This is important in the harmony of the costume. In fact, it is one of the three criteria that define the beauty and quality of the hanbok. The other two criteria are the curved lines which form the sleeves, “baerae” and the care given to the “kit”, a strip of fabric which forms the collar of the jacket, “jeogori“. The ends of the “kit” are generally square and a removable white collar called “dongjeong” covers it.

The regular folds of the “Chima” descend from the waist towards the end of the skirt to accentuate the elegance of the whole.

The different types of hanbok corresponded to different social statuses, to the gender and age of the wearer. Nowadays, traditional style of hanboks are worn on special occasions, and modernized styles of hanbok are worn as daily fashion or semi-formal wear. Although the hanbok is a style from the past, its beauty and significance make it a critical part of Korean wedding ceremonies, engagement photoshoots, birthdays, festivals, and major holidays. Internationally, lovers of Korean culture and hanbok fashion can acquire premium quality hanbok from online boutiques such as www.thekoreaninme.com, where consultants can guide you by phone or chat through choosing the best hanbok for every client.