When someone is surrounded by music their whole life, it’s only time that absorption turns into an unstoppable creative beast. Tkay Maidza grew up with music as a core family value; her uncle was Zimbabwean singer and advocator, Andy Brown. It was only natural for Maidza to step into a communal studio after school; when she recorded her first single just for fun, it was only uphill from there. After a dance producer picked up her track and played it during peak hour, Maidza dropped her educational pursuits in architecture to commit all of her energy into music. 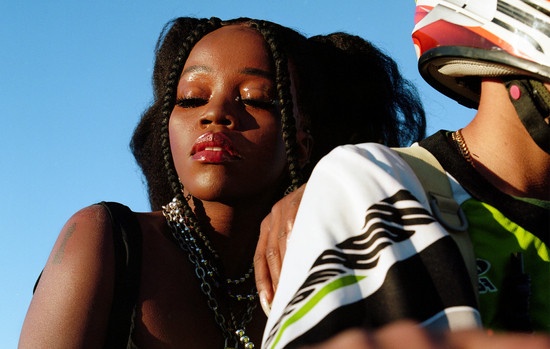 From there, Maidza has done everything under the sun, from sets at Reading and Leads to Governors Ball and tours with Mark Ronson, Charli XCX, and more. She became addicted to wowing the listeners with every performance and release. After a packed period (collaborations with brands like Nike and Tommy Hilfiger and awards and nominations), Maidza decided to take a more personal route. Last Year Was Weird is her R&B/hip-hop album and her self-launched fashion label. The second album was intimate while also universal; it’s a fusion of where she’s been and where she wants to go. The sharp grooves from her earlier work are there, but this time, her creative autonomy punctuates a new assertive drive.

The lead single off of Last Year Was Weird might be Maidza’s most compelling one yet. “Shook” is not only directed by Jenna Marsh (Beyoncé, Nicki Minaj), the video includes a myriad of Maidza’s very own ideas for this extensive anecdote. The rapper wakes up in the middle of a dusty junkyard, perplexed and disoriented, before being approached by foreigners that enclose her. Undoubtedly, she fits right in- in fact, she becomes the leader of the pack. Just like her lyrics state, “Earthquake yeah gottem all shook,” Maidza is defying the odds around her. The video ends when an unsuspecting man turns off the radio in the very car Maidza occupied at the start of the clip, unaware of the masked angel sitting on the hood.

The subtle references to the angel and devil represent the courage and doubts she faced during a peculiar period she experienced. The track flows with a Missy Elliot-esque beat, and the 90s fashion choices link her back to earlier hip-hop aesthetics. Her throwback allusions and contemporary finesse prove her ability to gain the appeal of every type of audience and dominate in any setting.