Ever felt like quitting the rat race, marrying a beautiful stranger, and starting your own rock band? Well, The Silver Snails’ Lucas Ward did exactly that, and the resulting ‘world’s finest pop rock’ has made us all the richer for it. 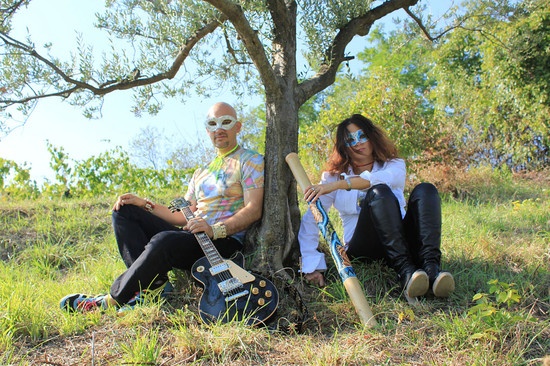 There’s something that just feels right about The Silver Snails’ ambitious pastiche of 60’s-inspired pop-rock, pan-global folk, jazz, and Baroque. The music fuses a devotion to craft with a quest for transcendence, and carries a message of universal love. Inspired by the natural beauty of their surroundings in Italy, The Silver Snails make music which is steeped in spirituality yet grounded in earthy rhythms and analog tones. They aspire for the songs on The 7 Melodies LP to “unite cultures and races around the world,” and “Beatrice Russo” is their latest effort to inspire and console a human family brought closer together by it’s newfound fragility.

Invoking the idealized and bittersweet nostalgia of a love denied by unlucky fate, Lucas and Elisa sing a duet in 2 languages. Like an echo of ‘Madame Butterfly’, Elisa’s airy soprano responds and beckons to Lucas’s tenor theme, the sense of joint expectation heightened by physical and cultural distance. In the Italian film, Il Postino, ‘Beatrice Russo’ was the lusty village girl who inspired an everyman mail carrier to pen his first metaphors. In Dante’s Divina Comedia, Beatrice appears to Dante as a spiritual guide through heaven, the personification of grace and salvation. Is she Eros or Agape? For The Silver Snails, the answer is ‘Yes’.

The Silver Snails painstakingly arranged and produced this mini-epic on the scene of their international love story, in Romagna Italy. The song employs lush violins and soaring guitars to heighten the dance of male and female elements, knitted together with seamless polish. Intertwining melodies soar and glide over the peaks and valleys of the driving, twinkling pop they’ve created.

The lyric video for “Beatrice Russo” uses photo after breathtaking photo of the countryside around Lucas and Elisa’s home to stunning effect. Deep reverence for the aesthetic genius of nature is on full display, giving us a snail’s-eye view of beautiful ephemera captured at apex: a wall of exploding blossoms, the moon setting over a castle, rolling fields of blazing sunflowers, single and double rainbows. So paradisaical are these images that the mind first registers them as the artwork of masters, as if to remind us that no art can compare to the actual beauty of the world we live in, at least for eyes that are open to it.

The clip breaks up the awesome scenery with heartwarming family and travel shots, putting a bow on this true fairy tale written by two people who know exactly how incredible it is to find your other half. Overflowing with heart and harmony, think of The Silver Snails’ “Beatrice Russo” as beautiful medicine and just what the doctor ordered.