Operatic Electric is made up of two multi-faceted artists: Composer/DI.J./Guitarist, Gene Pritsker & Juecheng Chen as countertenor. This is the duo’s debut, self-titled album and what a dandy! The record includes material written by Gene Pritsker for Juecheng Chen and electronics as the two musicians explore classic works by: John Dowland, Henry Purcell, Sergei Rachmaninoff, and Claudio Monteverdi, as well as original compositions by Pritsker. The end result is an intoxicating mix of sound like nothing I’ve ever heard before! This new release will have you knocking your socks off while your head is spinning! 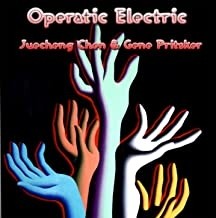 Composer/guitarist/rapper/Di.J./producer, Gene Pritsker has written over 700 compositions, including chamber operas, orchestral and chamber works, electro-acoustic music and songs for hip-hop and rock ensembles. So, it’s safe to say Gene is no stranger to tackling multiple genres and he is not afraid to try new things and push the musical envelope. This new album is no exception to that rule. This 11-track recording project can best be described as a melting pot of audio vibrations and vibrant notes bouncing around in every direction. And somehow, Gene, as conductor, has a masterful way of orchestrating all sections flawlessly with the utmost precision. With the help from powerhouse vocalist, Juecheng Chen, Operatic Electric will shock your senses and have you stop and reevaluate everything you THOUGHT you knew about the art of music!

The album starts up with a tune titled “Dowland Meditations Electronic” that sounds like a classical swampland complete with operatic dance. This song makes a big splash with its funky dance groove and Juecheng Chen jumping in with a very strong voice. The water is fine right from the start on “Dowland Meditations Electronic” that is infused with a haunting melody. Haunting melodies would be a reoccurring theme throughout the 11-song set. Next, we hear “When I am Laid ReMix” that slinks along at a mysterious pace while getting hit with free-flowing notes. Track three is burning with “Renascence” as the duo revitalizes our eardrums. Moving along, the listener will be singing along to the bouncy beat and be shouting out “Rock Me Amadeus” on “VoCalise ReMix”. Track five, “Only Knowing”, has Gene & Juecheng digging deep musically, vocally & artistically while track six, “Lasciatemi Morire! ReMix”, offers a trippy mix that is reaching for the “The Outer Limits”. Up next is “Not Marble, Nor The Gilded Monuments” that is whimsical in nature and even includes references to the great William Shakespeare. Track eight, “Take oNe, supplies a hypnotic pulse while track nine, “Echoes Through The Ages”, invites you into a digital wonderland full of shrieking willows. “Sonnet XI- Live ReMix” once again gives a nod to the iconic poet, Shakespeare, and ventures into another dimension that is stretching time & space. Operatic Electric literally ends matters on a high note or two… on “WIT” where the audience will be given a chilly, cool rhythm and eclectic tone.

Gene Pritsker’s digital innovations collide with opera phenom Juecheng Chen to create something wildly inventive & original to say the least. Together, this duo is Operatic Electric and they are bringing something completely different to the table. This collective unit is breaking down musical barriers and transcending music as we know it! Operatic Electric is born; all charged up and ready to GO!