The Dead Daisies hardly needed to add talent. The hard rock collective already features the thunderous Deen Castronovo of Journey and Bad English on drums, the scalding Doug Aldrich of Whitesnake and Dio on lead guitar, and the ferocious David Lowy of Mink and Red Phoenix on rhythm guitar. Together, they’ve found a fierce common groove and a collective voice that draws on their experience in classic bands without reiterating anything they’ve done before. They could have continued making great music exactly the way they’d been doing it. 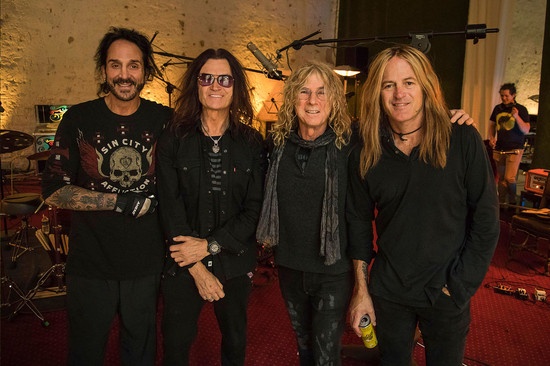 Instead, The Dead Daisies have decided to rock the boat. They’ve added another titan of heavy music to the lineup: bassist and singer Glenn Hughes, who brought the lightning to (among others) Trapeze, Black Sabbath, and Deep Purple. Hughes has one of the most distinctive vocal styles in popular music – a remarkable combination of power and dexterity. His range is legendary, but it’s the effortlessness with which he moves between notes that really distinguishes him. No matter how hard the band goes, Hughes goes harder.

On “Unspoken,” his sensational premiere with The Dead Daisies, Hughes demonstrates that he’s lost none of the fortitude that made him famous. On the contrary: he sounds as nimble, and as commanding, as he ever has. His bass chops, too, are as formidable as they were when he was providing an instrumental anchor for immortal Deep Purple albums like Burnand Stormbringer. Aldrich and Lowy add the six-string sting, and the sure-handed Castronovo drives the whole thing home with a series of jaw-dropping fills. We doubt you’ll hear a more immediately appealing hard rock song in 2020 – one designed to appeal to old fans of the genre (and old fans of Dio and Sabbath) and newcomers alike.

The Dead Daisies have matched “Unspoken” with a lyric video that underscores the song’s menace and its sense of play, too. This is no simple projection of words on a small screen – it’s as elaborate, and kinetic, as any live-action clip. Even the bone-white letters are in motion: as the song thunders on, they wave and sway, vanish like ghosts, and pop up on the horizon like storm clouds. In keeping with the hard rock brand, The Dead Daisies spike the video with plenty of ominous symbolism. You’ll see ravens, tombstones, haunted mansions, flashes of lightning, and, in a subtle tribute to the latest member of the group, a deep purple sky.