“She is Everything,” the song Élan Noelle sings with Art Tawanghar, is a lament. Sung over a slow, quiet musical bed, Noelle vocalizes about how a walk outside once brought her joy. Now, this same act brings her nothing but pain, instead. It’s a strikingly sad ballad, but it is also an effectively informative lyric, nevertheless. 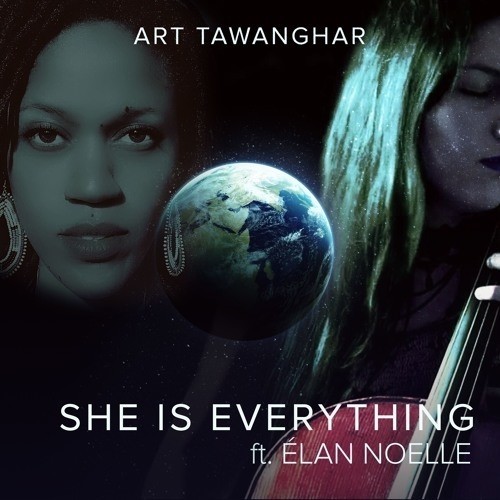 This track speaks to environmental issues. These issues range from the decreasing bee population, to rainforest fires. As Tawanghar has put it, “The animal kingdom [is] screaming out [an] SOS.” Therefore, this recording is much more than a lament alone. It’s also a call for awareness and – hopefully – action. Tawanghar challenges his fellow humans, “Let’s all come together and raise our vibrations. Help our Mother Earth, the only home to our kind, become whole again.” The title says it all because she (Mother Earth) is all we have.

Stylistically, “She is Everything” is a ballad. However, instrumentally, it is closer to a classical piece of music, than to anything in the contemporary pop realm. It features a somber piano part, orchestration and Noelle’s soulful lead vocal. There are parts on it where she sounds like she’s harmonizing with herself. Noelle is a San Francisco native that calls Washington, D.C. home now. It’s not surprising to learn how Noelle has studied acting, as well as music. She studied musical theatre at Howard University, has appeared on Netflix’s House of Cards and played the role of Lady Macbeth in Macbeth. Perhaps, most significantly, she has done a one woman show has Billie Holiday in Lady Day.

Lyrically, this song’s words bring that 80s all-star charity single “We Are The World” to mind. That song, you may recall, highlighted the connectedness of the whole world. When confronting starvation in Africa, we were also confronting our own starvation. It wasn’t about ‘them,’ so much as it was about ‘us.’ Similarly, when we confront environmental problems, it’s not about ‘troubles over there,’ but ‘troubles over here,’ too. The Earth isn’t just ‘an’ Earth, it’s the only Earth we have. The lyric’s desperation comes from the fact that, if we don’t preserve our Earth now, we won’t get a second chance. Yes, there are other planets in our solar system, but we’ve yet to discover one with an atmosphere suitable to support human life. Discovering another planet like ours doesn’t seem possible. Therefore, we really have no choice but to save our planet. As goes our planet, so goes human life.

There are many that believe now is the time for a “We Are The World” type of environmental movement. Climate change is a hot topic these days. Tawanghar’s song bravely takes this topic on and pulls no punches. This is not a speculative approach to environmental issues; instead, it’s a strongly worded opinion. In other words, Tawanghar is taking a side on the issue, and siding with those that believe we need to take immediate action. This is not easy listening music, even though it is pretty to the ear. It is a musical and lyrical challenge to all that hear it.