Art Tawanghar was inspired by Beethoven’s “Moonlight Sonata” when creating this recording of “Adagio in GM.” Just as Beethoven created “Moonlight Sonata” while experiencing a lot of emotional pain, so to was Tawanghar experiencing similar, if not the same, pain while tracking this piece. He has written how circumstances necessitated he separate himself from his family. Members of his family caused him pain, and then this separation certainly also caused him more pain. His response? He redirected his anger and disappointment into his music, which is always a healthy manner of dealing with hurt. 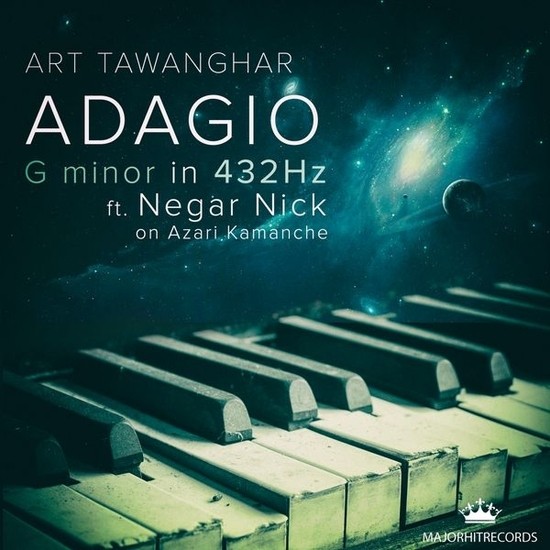 “Adagio GM” is short for “Adagio in G Minor,” which is a composition attributed to Tomaso Albioni. It dates to the 18th-century, although some say it was it was actually composed by a 20th-century musicologist and Albinoni biographer, Remo Giazotto. Giazotto predicated this piece on an Albioni manuscript fragment he found, some believe. This explanation is slightly controversial, but what is not a matter of controversy is the sad beauty expressed by Tawanghar via this recording.

This recording is unique in a couple of ways. For one, it features Negar Nick performing it on a Kamanche. Tawanghar has said this piece has never been performed on this unique instrument. Secondly, the composition has not until now been performed in 432Hz. Instead, much of the time one hears it only as a raw conversion.

In addition to working through his own pain, Tawanghar also dedicates his recording to “all the children around the world who have been subjected to any kind of bullies, verbal abuse or emotional blackmailing.” He continues this dedication with a benediction: “My prayers are with you. May God bless your soul!”

At seven minutes and twelves seconds long, this recording is a fully classical piece. On it, Tawanghar can pour all his mixed emotions into it. It is a relatively slow piece of music, but while not especially rhythmic, it is no less dramatic. In addition to the elongated Kamanche notes, it also includes countering piano punctuated notes. This recording’s length is significant because it supports the truth that painful experiences are rarely ever brief. Sure, it may take only a few minutes for a bully to push another child around or for a verbal abuser to say hurtful things to somebody, but these experiences have a long-lasting impact on their victims, long after the incidents.

The beauty in Negar Nick’s performance cannot be understated. It is invested with sincere feeling. Clearly, Nick understood Tawanghar’s intentions for this piece and matches with instrumental virtuosity what Tawanghar must have felt when wronged by his family members.

It’s been said many times, but music is a language all its own. It often says what words can never say and expresses emotions that go deeper than many conversations can ever lead us. This performance of “Adagio Gm” is also a reminder of how timeless music can be. Even though its composition was begun so many years ago, its impact is just as powerful today as it surely was back at its inception.

If you have hurtful feelings that just can’t be put into words, perhaps this recording will help you work through any heartaches you might be going through now.