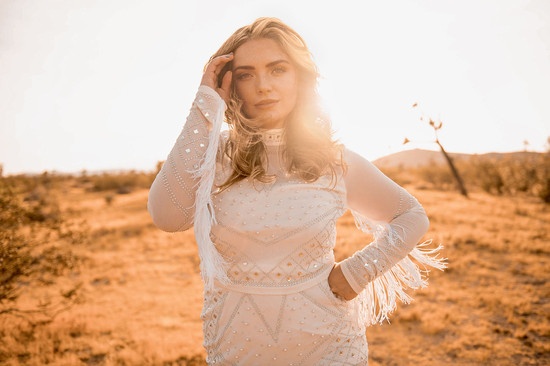 When we look back on lost relationships, our thinking is rarely linear. Instead, memories come to us in a rush: we recall the excitement of meeting and the giddiness that follows, the tender moments, the regrettable fights, the feelings of regret and missed chances. Finally, we’re left with a sense of resolution – a clearer understanding of what we didn’t do right, and determination to get it better next time.

Kailey Nicole’s remarkable clip for “Change My Ways” takes viewers through all of those stages, and still more evocatively, does it in what appears to be one continuous shot. The Nashville-based country artist is singing from hard experience: she’s been there, she’s made it through with her chin up, and she’s ready to share what she’s experienced. Through a little camera trickery and video editing, she’s able to bring a relationship to life – from its sweet beginnings to its rueful end.

Fans have become accustomed to getting the whole package from Kailey Nicole. Not only is she a gifted country storytelling songwriter with strong traditionalist leanings, she’s also an accomplished actress with commanding screen presence. She dominates every shot of the “Change My Ways” clip and leaves an indelible impression. During the rare frames when she’s not on camera, you’ll wish she was.

She’s just as powerful a force on record. Her self-titled EP introduces fans of country music to a singer of great communicative power – an artist who’ll catch your ear from the very first syllable, and won’t let you go until the narrative is over. To produce the six-song set, she’s enlisted the help of veteran producer Niles Thomas and Grammy-winning engineer and masterer Bonzai Caruso, who has worked with everyone from Madonna to Stephen Marley. Together, they’ve made an EP of uncommon depth: one that’s immediately catchy and fresh, but also one that, because of its coherence and focus, stands up to repeated plays.

The “Change My Ways” clip takes us into a typical Nashville bar – although the greats framed on the walls aren’t exclusively country artists. There, Kailey Nicole meets a handsome stranger, falls in love, learns about the pain of distance, and watches him drift away, all in the course of two and three-quarters minutes. Each booth of the bar represents a different scene in the relationship. Sometimes, we’re shown more than one booth at a time, which means more than one Kailey Nicole; often, we see the singer at two distinctly different stages in her emotional trajectory at once. But what’s really gripping about the video is how restless it is. The camera, never still, always finds Kailey and her beau, either coming together or coming apart. Romance, it seems, is something that can never be pinned down – it can only be experienced and lived through, in all its wild intensity.