When Art Tawanghar refers to “she” as “everything,” he is referring to a mother, specifically Mother Earth. It’s his musical response to “the cracking sound of suffering bees smelling the burning fires of the beautiful rainforests.” It’s also a call to action. “Let’s all come together and raise our vibrations. Help mother EARTH the only home to our own kind become whole again.” It’s a mighty big order, and this composition expresses Tawanghar’s sincere feelings about the planet’s troubles, and man’s abuse of his own environment. 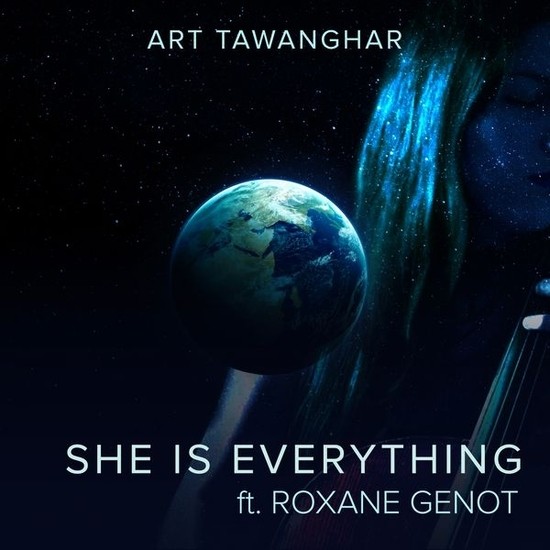 The track begins with a classical-sounding piano part. However, it quickly gives way to a cello-driven melody. This cello is played by Roxane Genot. Genot plays a relatively simple melody. It’s the musical sound of mourning. It’s akin to something one might hear played at a memorial service, as a matter of fact. Although many have helped raise awareness to the environmental problems the world faces of late, there is still much work to be done. Whether you believe in an urgent need to reverse damages from climate change, or just something as immediate as getting rid of dirty air (smog), we all agree – no matter the political persuasion – that the Earth is not in the same pristine condition as it was when God created it.

This instrumental piece builds to an emotionally gripping ending, with a fully orchestrated conclusion. One also hears what sounds like a harp part joining the mix toward track’s end. There is also what sounds like a wordless choir entering in. It builds in the same way one would hope that environmental advocacy would increase. From scattered voices, to a full orchestra of protest, if you will.

Music has a way of expressing emotions like no other type of reaction. You don’t need to hear Tawanghar’s words to still pick up on what he’s saying with this piece. George Harrison once sang a song called “While My Guitar Gently Weeps,” which was his way of saying how the very sound of his guitar proclaimed his message loud and clear. Genot is just such an expressive musician. She can transform her cello into a crying instrument. Yes, the Earth is suffering, and Genot’s cello is gently weeping over the planet’s pain.

Indeed, there is the emotional factor to this piece of music. However, let’s not forget about its inherent beauty. Whether you know what this composition is about or not, it’s still features an enjoyably memorable melody. It has a cinematic quality, as well, and it’s not difficult to imagine hearing it played over the closing credits to a motion picture.

The good news is that this is funeral music that need not be played at a funeral. (That is, Earth’s funeral). It’s a wakeup call, of sorts, which means there’s still time to heal our planet. There are so many things we can do to make our environment more livable. We can preserve wildlife. We can lessen carbon emissions. We can recycle. The options are nearly endless. So, don’t let this piece of music make you walk away sad. Instead, let it inspire you to take positive action. It’s the least you can do.