After two years of silence, fans of The Aces were itching for new content. Finally, the band gave listeners what they wanted: a sunny and electric track signifying their resolute return. The glimmering indie-pop creation of Cristal Ramirez, McKenna Petty, Katie Henderson, and Alisa Ramirez is unmatched; they craft hits that are entirely relatable while also unique to individual experiences at the same time. Their vulnerable lyrics are wrapped up in pure euphoria and trademarked by their infectious basslines, liberating musical messages, and platonic and escalating love for one another. 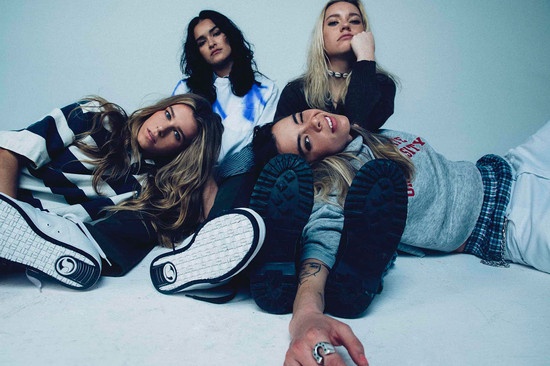 They worked their way up the ladder beginning their performances at school assemblies, moving up to music clubs, and most recently striking a deal with Red Bull Records in 2016. The online publication, Provo Buzz, titled them one of the city’s “Ten Best Bands.” Throughout the years, The Aces have supported other indie bands on tours, like Joywave, COIN, and 5 Seconds of Summer, but in 2019, they embarked on their own headlining tour to support their 2018 album, When My Heart Felt Volcanic.

Viewers are transposed into the pensive desert of the West in the music video for “Daydream.” Just as the song title states, it all feels like a daydream: the glow of the sunset, the reflection of a shiny car hood, and all-night antics have come up as desires in our own imagination. Cristal begins the journey stranded on the side of the road, managing to hitchhike with a passing driver. Tired of his creepy advances, Cristal hijacks the car as the violator steps into a convenience store. She picks up her bandmates, and they commence into a long night of shenanigans.

The quartet’s synergy gives them the coordination to distract a motel receptionist while stealing the lobby’s snacks and soda. They end their mischief by dining and dashing at a local diner and speed off in their stolen ride into their next adventure. Though at its core, the song is about the separation of lovers, the video eases the sentiment with wild rides and endless nights.