Song mashups are wonderful things. The way someone can hear two entirely different songs and pick up on what they have in common is a gift. Then to take what they hear and meld them together makes you listen to each song in an entirely different way from then on. Alias Wayne’s ‘new’ single, however, is a mashup of an entirely different variety. It is singular song comprised of two different songs, which are then combined into one. Also, calling this a new single may be a little misleading. Yes, it’s new for Alias Wayne, but these songs are actually older ones. They are the Rolling Stones’ “Gimme Shelter” and the Buffalo Springfield/Stephen Stills written and sung song, “For What It’s Worth,” which each date back to the 60s. 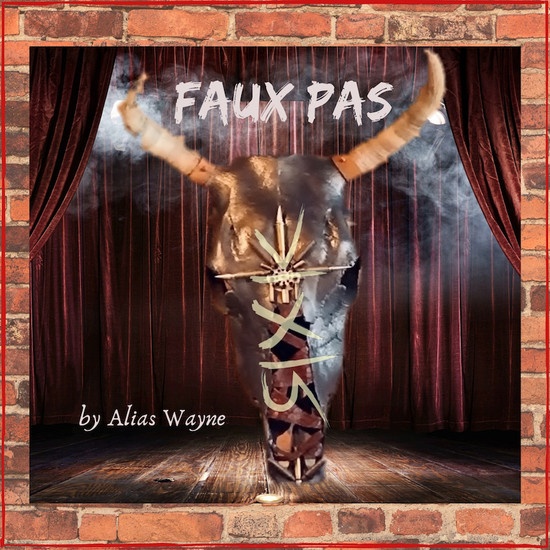 One song, “For What It’s Worth,” was inspired by counter-culture clashes on Hollywood’s Sunset Strip in 1966. Yes, one might assume it was inspired by the Vietnam War. And yes, that is likely some of what Stills had in mind, as well. “Gimme Shelter,” on the other hand, is taken from the Stones album, Let It Bleed. Keith Richards, who wrote it with Mick Jagger, has said the song was influenced by his jealousy of Jagger and (at the time) girlfriend, Anita Pallenberg. It, too, became associated with the Vietnam War, and the corresponding protests of that war.

Alias Wayne’s version, which is taken from his Faux Pas album, begins with harmonica and an acoustic guitar playing that familiar opening to “Gimme Shelter.” So, right off the bat, this version is much more stripped-down than the rocker it is in Stones’ hands. The song remains just as acoustic, once Alias Wayne begins singing the words to “For What’s It’s Worth.” This reconfigured song mainly focuses on the verses to “What It’s Worth,” which the lead into the chorus to “Gimme Shelter.”

Yes, these songs were inspired by events that happened a long time ago. Their messages remain relevant, though. The lyrics to “For What It’s Worth” is a timely reminder to remain observant. In our rapidly changing world, it can be difficult just to keep up. However, whenever a government is doing anything to harm its citizens, said citizens need to speak up. Stills’ song speaks about hippies on Sunset Strip. However, these words likely ring true for today’s millennials, too. When Alias Wayne sings, “Paranoia sinks deep,” it’s a universal statement. We must always remain aware of paranoia, wherever it’s found. Similarly, “Gimme Shelter” is both a warning and advice. While it talks about dire conditions (“Oh, a storm is theat’ning”) it also includes statements of faith in the future. “If I don’t get shelter/Oh yeah, I’m gonna fade away.” True, there are storms in life; but there are also always shelters to keep us away from the storm’s damage.

These songs may each be old now, but their power remains strong. Thankfully, Alias Wayne has tapped right into that power.