Second Hand Mojo’s EP, After Midnight, is a welcome blast of Midwestern rock. Yes, the act’s style can also be described as Southern rock, but the act also has Michigan roots. Thus, the sound of these six tunes, such as the soulful organ that fills and solos on the project’s title track, gives the music a multi-regional vibe. 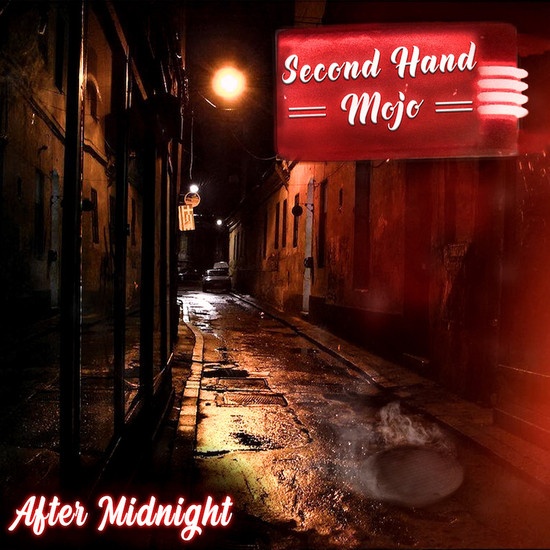 These songs are mostly fast ones. One striking exception to this rule, however, is “All About You,” which is a slow blues track. It begins with acoustic piano, before vocal and other instrumentation take their places. It’s a song that describes the sadness of being without a lover. For instance, one verse talks about how the house changes – with pictures removed from the wall – after a lover has moved on. “One Last Song” is also a slower, quieter selection. It’s also a mournful one, as the lyric tells of how a couple was no good for each other. One called “Hold On” is more representative of the whole, as it rocks out with plenty of organ and electric guitar. It sounds a bit like a70s Journey track. Second Hand Mojo vocalist Chuck Riepenhoff, however, is a much gruffer singer than Steve Perry, which makes it different from a Journey song. The project closes with “Saturday Night,” which is a fun, upbeat rocker. This one comes off a little like Bon Jovi fronting Bob Seger’s Silver Bullet Band. The song’s message is simple and straight forward. It’s all about having a good time on a Saturday night. After all the strain put on us by the work week, Saturday nights were made to let loose and let off a little steam. On it, an electric guitar riff takes center stage, while a rocking organ assists to power this energetic dosage of celebration.

The album opens with “Call Me,” which is not at all the Blondie song of the same name. However, it expresses a similar sentiment – this guy wants a girl to call him. It’s interesting how times have changed when it comes to relationships. Back in the day, people had to write phone numbers down on little slips of paper and hope they didn’t lose them. Then they’d need to get home to their phones to make calls. No so now, though. We can instantly put new numbers in our cellphones. It speeds things up. It can lead to a faster relationship formation, but it can also make for quicker rejections.

The album’s title track is like “Saturday Night,” in that it speaks about lively night life. It’s been said by some that nothing good happens after midnight. However, for musicians and music lovers, this is the hour when living truly begins.

Musical styles may go in and out of style, but the kind of sounds Second Hand Mojo create will always find an audience. These are tested and true elements, and After Midnight is a solid, pleasurable effort. It’s the kind of album that sounds good any time, but probably reaches its apex while cranked up during the late-night hours. If you have firsthand knowledge about the power and the glory of rock and roll, Second Hand Mojo will sound simply magical to you.