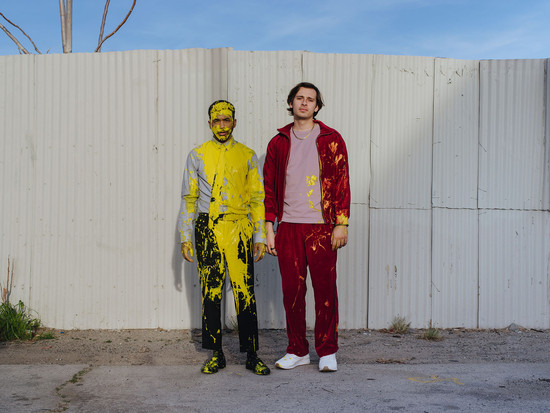 When outsiders think of Los Angeles, South Anderson Street isn’t the sort of place they envision. There’s no beach there, or palm trees, or outward signs of glamor. Instead, it’s warehouses, and chain-link fences, and graffiti, and the scrub growth associated with post-industrial zones. Yet South Anderson Street runs through one of the most vital neighborhoods in town – a place of broad cultural ferment and bold innovation that has attracted artists of all sorts. It’s here that many unusual filmmakers and musicians have headquartered their projects, and it’s here where director Jonathan Zawada (who is something of a mad scientist himself) has set the video for “The Difference,” the latest single from the perpetually adventurous Australian electronic producer and fearless soundscaper Flume.

Well, half of it, anyway. The video for “The Difference” is rendered in a perfect split-screen. On the right side, Flume runs breathless down South Anderson with some abandon, occasionally grazing or colliding with passersby. The left frame contains a closeup of the experimental pop musician Chaz Bear, better known as Toro y Moi. At first, the two sides of the clip don’t seem to have anything to do with each other. But before long, the split-screen gutter is breached, and the images begin interacting in ways that are downright psychedelic.

The same could be said of “The Difference.” It’s a firm handshake between the radiant melodic pop that Toro y Moi is famous for, and the breakbeat-spiked electronic majesty of Flume – and at a little more than two minutes, it floats by like a cloud on a blustery day. The new single follows the acclaimed Hi This Is Flume mixtape that earned the Sydney producer and songwriter a Grammy nomination for Best Dance/Electronic Album. That’s the same golden gramophone that Flume took home in 2017 for his critically lauded third album Skin.

This isn’t Flume’s first collaboration with Zawada. They’ve made two videos before, and they’ve developed a visual signature that suits Flume’s music: it’s colorful, trippy, full of electronic effects and startling juxtapositions. Those familiar with prior Flume clips won’t be surprised at the speed with which Zawada’s version of South Anderson Street turns into a weird, glowing, tripped-out amalgam of terrestrial Los Angeles and computer graphics. But even the most jaded fan of music video may be startled by the tide of bold digital color that swamps Toro Y Moi.