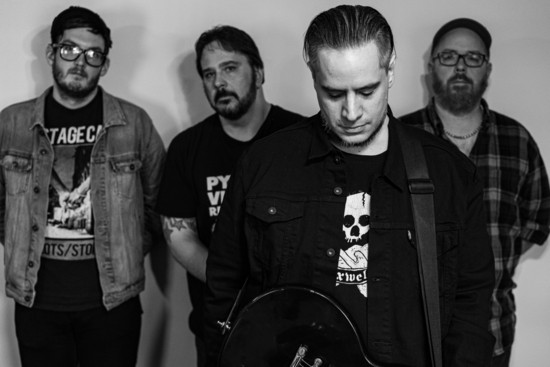 The 65’s are the product of their environment, hailing from the streets of New Jersey where they’ve cultivated their highly original blend of cathartic punk rock and urgent power pop. They have taken some elements bands like the New York Dolls to the Sex Pistols and formed their own unique “fast and furious” delivery. The band consists of Joe Pugsley (guitar, vocals), John Steele (drums), Ryan Struck (bass, backing vox) and Ed Roessler (guitar).  The name of the band was founded by Joe Pugley as he explained.

“It’s a bit esoteric. I was a Philosophy Major in college and got into a lot of fringe philosophical traditions. Without naming any tradition in particular, the number 65 according to one symbolizes “your greatest self” – so it is a reminder of what to strive for, especially during difficult times – the goal being to be the best version of yourself possible. I’m certainly not claiming to have achieved this; but having it as a reminder helps and conveys a message, even if no one knows what it means!”

The band has been influenced by such acts like Leatherface, The Replacements, Bob Dylan, The Dead Boys, and everything Stiv Bators had done. The music The 65’s bring to the stage is an aggressive energy that invokes the influences they grew up with. Their first project “Strike Hard” was released under Dromedary Records. They broke their ground at the club Maxwell’s in Hoboken, New Jersey. Soon they would come out with their first video for the single “Walk On Selfishly”. Eventually they branched out on their own and began to release music under their own imprint Pyrrhic Victory Recordings. The band has worked with engineer Kevin Lacatena from Homebrew Studios who has kept their sound intact.

For the past ten years the band has played at numerous venues in the Tri-State area not letting up. One of their favorite places since Maxwell’s closed has been the Mercury Lounge. They would manage to release three EP’s between 2013 to 2017 along with an assortment of singles and collaborations. One individual who they worked with was Rik Mercaldi (of The Subterraneans) who did some lap steel on a track for them.

Currently, the band has a new EP out entitled “Never Say Never” which maintains its signature sound yet infusing a fierce sound that will make you take notice. It was recorded at Homebrew Studio in Sparta NJ with producer/engineer Kevin Lacatena. The band was very busy in 2019 playing at numerous venues. They have new songs in the pipeline that they are eager to work on before hitting the road again. It must be noted they also run their own label and work with other bands to flush out their music as well.

“Working with other bands sometimes may slow The 65’s down a bit but to us it is all worth it. We believe in our bands, so we invest time in them. It’s “strength in numbers” approach and benefits us all. So, in the next few months, as said, we will be focusing on finishing our recordings, as well as helping our label’s bands get their music out and heard as well.”

The 65’s are a unique band with an entrepreneurial spirit that will only benefit them down the line on their musical journey.