A bouncy beat is waiting to greet us as the dam separating the heavenly harmonies of “Sunday Driver” from us, the lucky audience soaking up this latest release from singer/songwriter Casey Ahern, suddenly breaks apart at the start of the single, its presence immediately introducing a relaxing energy into the room around us. This instrumental opening salvo doesn’t last longer than some ten seconds, but it doesn’t have to run past this mark in the track to make a really big impression on anyone who is within earshot of its melody – for it’s inside these first few bars that the entire scene is set for Ahern’s vocal to take over the stage only moments away from now, because once she starts to sing, there’s no paying attention to anything the backing band is doing. 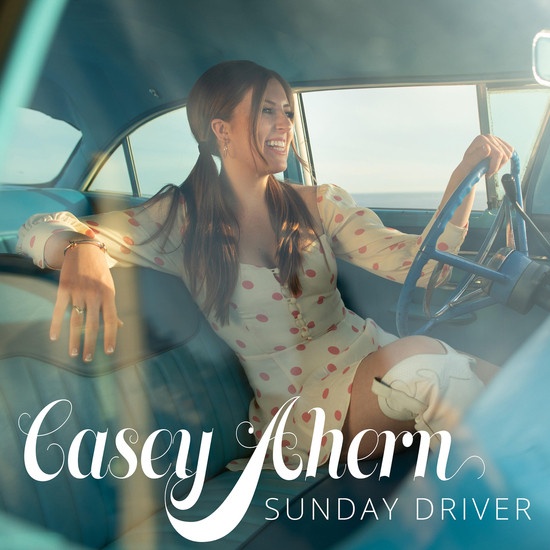 Ahern’s serenade is slightly biting at first, seeming to recklessly waltz its way into the sway of the instrumentation as though it could change the shape and identity of the rhythm with a mere shift in tone – which, to tell the truth, it absolutely could. After a few lines, it starts to even out, sounding a bit more like the humble, somewhat shy vocal that got “Just a Dance” started just a year ago. She’s careful to avoid the pitfalls that come with artistic excess in “Sunday Driver,” but even though she doesn’t drift far from the center of the road here, I don’t think she’s trying to hold something back from us in her lyrics at all.

As a composition, this single is the strongest of Casey Ahern’s discography bar none. “And Me” was a shot in the dark at greatness that came remarkably close to hitting the mark while the few songs we heard on the 2018 EP He Was Summer had scattered elements that hadn’t been correctly pieced together to make the majority of critics rave in ecstasy, but with “Sunday Driver,” all of the raw parts have been assembled to make Ahern’s talents even more engaging than they were in the past. She isn’t trying to find herself as an artist here, nor does she play the part of an indie singer/songwriter simply trying to satisfy everybody’s needs without getting specific in her statements – Casey Ahern is being Casey Ahern in this single.

“Sunday Driver” concludes on a quieter note than it starts up with, but its peaceful ending doesn’t somehow minimize the effects of its preceding three and a half minutes of soft country/pop thrills. Steeped in the same melodies that once acted as traditional pillars of artists in both Americana and west coast folk music, this latest single from Casey Ahern is an introspective gem that says a lot about the woman behind its wispy rhythm, and it’s definitely made me want to hear what she can do live sometime soon. Her skills speak for themselves in this track, and if they’re as good on the stage as they are in the studio, hers would be a show I wouldn’t want to miss this year.