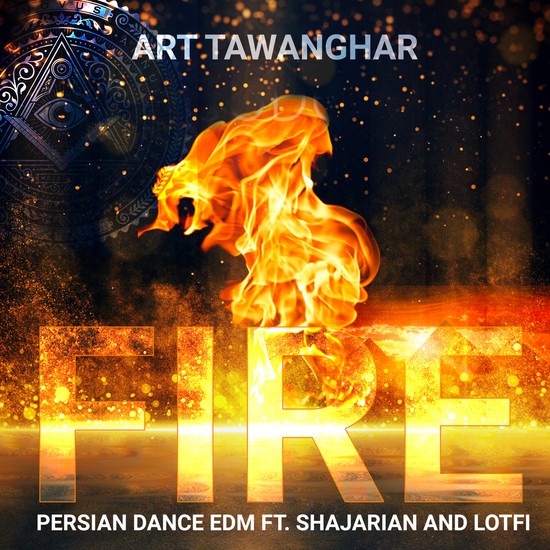 The notes accompanying “FIRE, Persian Dance EDM ft. Shajarian And Lotfi,” speak about “delivering the truth to where it’s needed.” It also advises listeners to “cling to the power of higher truth.” These words are as much spiritual, as they are political. This explanation continues by reminding us that, just as we need the material essentials for life, we also have spiritual necessities. We’re also informed about the hexagram Li, which is said to be the fire clinging to the wood that burns. Maybe you won’t pick up on all this song’s spiritual undertones. However, even if you don’t, this is one “hot” dance track.

Art Tawanghar composed and arranged this five-minute-plus track with an unusual (yet still fitting) mixture of modern dance elements and old-world sonic elements. The beat is a steady 4/4 groove that will easily and quickly get any dancefloor moving. It’s not long, though, before accordion enters this mix. This is not cheesy polka music, though, like some of Weird Al’s sillier recordings. Instead, this accordion is set free, if you will, to improvise wildly. It’s likely you’ve never heard accordion played like this. It’s played more like a jazz musician might play the instrument, and not like typical musical accompaniment.

In addition to this song’s distinctive accordion part, there is also what sounds like a wordless vocal running through it. This may actually be Persian words, although – to these non-Persian speaking ears — it sounds more like the American equivalent to scat singing. The track begins with electric piano, which gives the recording a distinctly jazz vibe – at least in its intro.

The exhortation, “cling to the power of the Deity to deliver the truth where it is needed,” will resonate with many moderns – no matter where one falls on the political/social spectrum. We’re living in the social media age, where various social media platforms are busy spreading fake news. Heck, even legitimate news channels are sometimes accused of being fake news disseminators. Therefore, who do you believe? Also, which deity do you believe in? That last question opens a whole new can of worms, though. We all want truth, and we all need truth, but we don’t always know where to find truth. This doesn’t negate Tawanghar’s message; it just instead adds a complicated layer to Tawanghar’s simple wish.

Melodically, this recording is relatively simple. The beat is basic, and the chord structure is minimal. But like a good salad, it’s not about the lettuce. Yes, most all salad’s have a salad base; but it’s what you put on and in the salad that can make it special. For Tawanghar, this track’s beauty is the traditional instrumentation and singing that are applied to its groove that sets it apart from anything you’ll hear in more conventional dance clubs.

Tawanghar’s search for higher spiritual meaning in life is akin to what John Coltrane reached for with his pioneering jazz music. As long as man has been on the planet Earth, he has sought to understand god. Tawanghar may not have yet found all the answers yet, but he sure asks some mighty compelling questions musically.