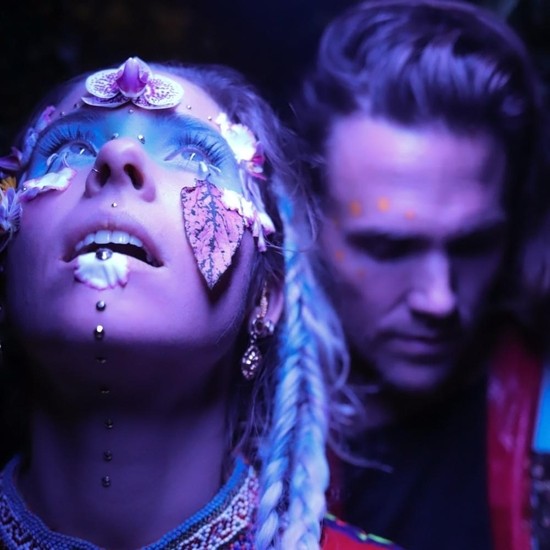 When making World Music, it helps to have traveled the world, with an ear for the hundreds and hundreds of sounds, instruments, rhythms, phrasings, and traditions making up the intricate fabric of global music. One listen to Elephant Heart’s latest single, “Love Is The Weapon,” and it’s clear that husband and wife Jason and Victoria Evigan have put the miles, the time, and music-lovers’ attention into their shared passion for international travel. The genre-bending twosome formed their world electronic collective in 2016. They began regularly releasing singles in between Jason’s award-winning music production and their duties as co-founders of the international non-profit charity Picture This. Elephant Heart combines the studio prowess of Jason, who’s worked with Madonna, Maroon 5, Demi Lovato, David Guetta, and Ellie Goulding, among many others, and Victoria, who serves as the group’s vocalist, songwriter, lyricist, and producer. Their fanbase spans the globe as well, with tens of thousands of fans spread across Instagram, Facebook, and Twitter.

Billboard raved that Elephant Heart’s last single, “Lenguas,” was “here to cut through the modern noise and shake your booty to its core.” Lightning has definitely struck twice, because “Love Is The Weapon” is a shot of adrenalized positivity straight to your mindstate and your moneymaker. Over a patchwork riot of percussive groove, Victoria’s tuneful, warrior vocals turn the idea of love-as-a-weapon on its head, holding it high as an instrument for Good. Backed with hypnotic chants and strings, Elephant Heart’s message here rings out like a thunderclap — we are unstoppable when we are united. The song organically straddles genres, layering the duo’s pop sensibilities atop ancient rhythms and instruments, transporting the listener across time and space, and making sure they have a killer soundtrack to their journey.

We get an intimate view of the kind of “travel with purpose” Jason and Victoria engage in as they perform alongside the many folks they’ve come to call friends in the underserved neighborhoods of Paal Road in the Indian city of Jodhpur. They sing, rhyme and groove to their exhilarating dancefloor track among the sun-baked dwellings and structures, some dating back to the 15th Century. The locals, adorned in Bindis and eye-popping colors, are out in full force, know every word of the song, and are more than happy to back up the band. The “Love Is The Weapon” vid was produced by industry game-changer Pat Ridge, who’s made videos for Cardi B, Travis Scott, Steve Aoki, as well as that infamously viral Sheck Wes revenge clip. Wherever their travels take them next, let’s hope Elephant Heart comes back home with enough inspiration for a whole record.