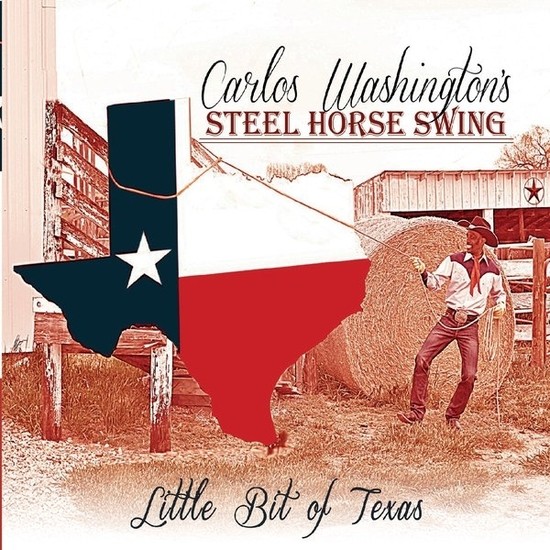 Gently rising from the dark silence that precludes the start of any great album, we find an emotionally-charged string melody beginning to take shape in “I Can Still Make Cheyenne” that instantly clues us into the chill-inducing tonality that is about to come pouring out of the speakers just moments from now in Little Bit of Texas, the new album from Carlos Washington’s Steel Horse Swing. This introductory song is a spellbinder without question, but next to the title track that follows, it’s only a small sample of what Little Bit of Texas is going to throw in our direction. With Carlos Washington’s voice to lead us, we enter the thick forest of harmonies ready to experience the wealth of string play and storytelling he can serve up.

Little Bit of Texas’ eponymous cut is probably the most radio-ready song here, but much like “Sugar Moon,” it doesn’t have any overly polished elements that would suggest it was created solely to get the rest of the record into steady rotation somewhere on the country dial this March. “I Am a Cowboy Y’all” continues the upbeat swing of its predecessor by stepping up the percussive presence just enough to give Washington’s vocal a firm backend to support every verse he sings, and along with “My Little Red Wagon,” reminds us that you don’t have to pack a lot of artificial intricacies into a modern country song to encapsulate the essence of contemporary sonic prowess and old school melodic charm at the same time.

“Miss Molly” kicks up the pace just a bit before turning us over to the self-explanatory “It Was Love at First Swing,” which boasts an almost jazzy rhythm to its underlying groove. There’s something about this latter song that makes me curious about hearing Carlos Washington play other styles of music other than traditional country; he’s got so much versatility that it’s almost wrong to limit his skills to the stylish beat of “House of Blue Lights” and “The King of Western Swing,” but that withstanding, there isn’t anything about the aforementioned tracks I would change. Little Bit of Texas occasionally feels like more of a teaser album than a full-blown statement piece, but in either case, it’s an excellent way to spend a half-hour.

Carlos Washington’s Steel Horse Swing conclude their new LP with on a powerfully emotive note in the ballad “I’m Coming Home,” and though this final song feels a little heavier in tone than most of the tracks that come before it do, it doesn’t cloud over the other compositions in Little Bit of Texas at all – actually, I think it ties everything together rather perfectly here. Country music has been in need of a singer/songwriter like Washington for a hot minute now, and though he’s got a long way to go if his ultimate goal is to break the mold of the longstanding country establishment, I don’t think it would be much of a stretch to say that he’s off to the best start he could be in this amazing album.