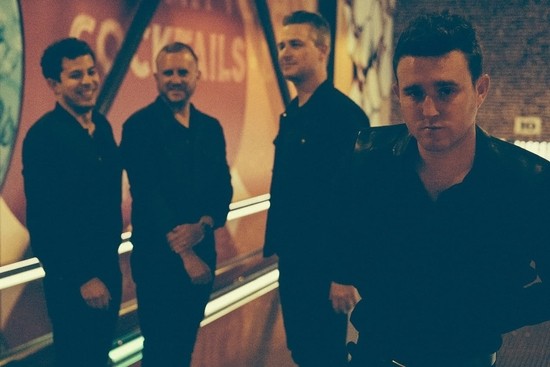 Heartracer traffics in the best kind of razor-sharp synth-pop nostalgia. They’re a bottomless well of the timeless hooks, resonant lyrics, and emotional wallops that make the radio days the throwback soundtrack to the most important years of everyone’s lives. And you know what Heartracer sounds like, but they got so good at it so quickly, and they’ve made it so their own ever since, that you simply can’t nail down who they sound like. Brothers Chris and Chip Cosby formed Heartracer in Richmond, Virginia a few years and a few records ago. These days, the band is Chris on lead vocals and keyboards, Chip on guitar and vocals, Wes Tatum on bass, keyboards, and backup vocals, and Bryan Reyes on drums and percussion. They’ve shared the stage with acts like Walk The Moon, 4AD’s Future Islands, Third Eye Blind, Banks, Joywave, and Pvris. Their new single “Darling” was engineered at Fidelitorium Recording Studio in Kernersville, NC by Ted Comerford (Jukebox the Ghost) and mixed in Los Angeles by Paul David Hager (Katy Perry, Beck).

It’s pretty fitting that Heartracer is named after Chris’ Tachycardia diagnosis, a lifelong condition that causes the heart to speed up and slow down at random. “Darling,” like much of the band’s song work, mimics the emotional jumpstarts and comedowns of navigating love, and either rejoicing in the triumph or wandering the ruins. One minute a low-key nervous energy, a staccato, angular bass groove and electronic clap-kick dominate. There’s a fragility, a hopefulness that gives way to Chris’ deft, full vocals, supremely confident and in full control, even while delivering highly charged, highly personal turns of phrase. The icy guitar chimes, propulsive beat and atmospheric chorus backups intertwine in a headrush mesh of echoes and reverb. “Darling” is how people who’ve really been in love write songs about love: a vulnerability worn like a medal pinned permanently to their chest.

In Heartracer’s performance video for “Darling,” the band tears into the track inside a dimly-lit space that appears to have no walls or ceiling. Racks upon racks of magenta and blue bulbs illuminate the haze that surrounds the band. The whole clip feels very evocative of a time when our go-to records only needed the visuals of the band entirely in the moment, as joyously lost in the track as we were. The band moves to the rhythm like genuine fans, their fitted blazers and sunglasses at night completing their aesthetic. We see ourselves on that screen because what we did we always do when our new favorite song came on, and it spoke to us like it was written just for us? We danced.