Molly & The Krells is a quartet from Sydney, Australia, and even though the act features seemingly a girl’s name in its moniker, all four members are actually guys. The group plays what can best be described as punk-inspired pop music. (Or is it the other way around?) Whatever, the case, “What Went Wrong” is a delightful burst of emotive rock & roll. 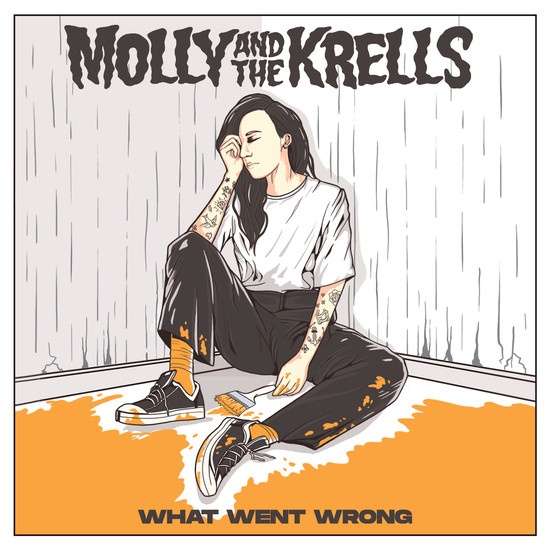 The track kicks off with a chunky guitar riff, before the vocal comes in. Lyrically, there’s also some immediate intelligence coming through this tune. “Every now and then,” it begins, “the hand you hold is the hand that brings you down,” vocalist and bassist Blake Cateris announces. “Everyone’s got someone from their past/Trying to run their future,” Cateris continues smartly. These words are sung from someone trying hard to make sense of what goes awry in relationships. The one you’re holding hands with should bring you along, not bring you down, while those in your past shouldn’t have anything at all to do with your future. However, reality is no fairytale, and our best friends and lovers can many times turn into our enemies. It’s not fair, but it’s just life.

Cateris has a relatively smooth singing voice. He’s not a shouter, at least on this track, nor is he one to sing in a rough-sounding voice. Instead, he has a voice perfectly suited for power-pop, which is a style that has certainly left its mark on this band. The overall feel of this song is that of Green Day at their most apolitical. Instead of arguing about politics, Molly & The Krells just want to comment on the evergreen subject of relationships. When relationships are going well — let’s be honest — they can be a little boring. Good romantic commentary in song is usually much better whenever relationships break down. It’s kind of like the news. No newscast ever begins with, ‘Everything went just peachy today.’ No, the news is about all that went wrong everywhere, and this single is just a more personal slice of that sort of life.

The track is a tad over three minutes long, and it has a melody that gets immediately stuck in your head. You’ll be singing along after only one play. Cateris explains this sad sack’s circumstance like a friend hurting for his friend. He watched his friend’s relationship go bad, but never had the power to fix it.

The lyrics get a little profane towards the end, which mirrors how many of us become once we realize our relationship is a sinking ship. We might begin by fairly calmly describing the situation, but eventually we become exasperated and let a few f-bombs fly. It’s only natural. There’s just something about Australia that it produces brainy punkish bands like Molly & The Krells. It’s almost as though the whole DIY punk movement in the U.K., and the hardcore era in the States, never made it all the way to Australia. Aussie bands caught all the energy of these two movements, yet never lost touch with the need to create melodic songs. Therefore, a whole lot went right with how Molly & The Krells created “What Went Wrong.”