There’s a reason why most truly innovative pop songwriters are young. Talented young artists haven’t yet learned how to capitulate to convention. A skilled young writer can’t help but do anything but follow her own muse – no matter where it takes her. Lila Blue doesn’t try to be different: she just is, and that’s how you know her departures from expectation are sincere and wholly embodied. The New York-based artist makes music that doesn’t sound like anybody else’s. Her songs are a complete expression of her unique personality: they bear the imprint of a singular musical intelligence, and that’s an extraordinarily exciting thing for any listener to encounter. 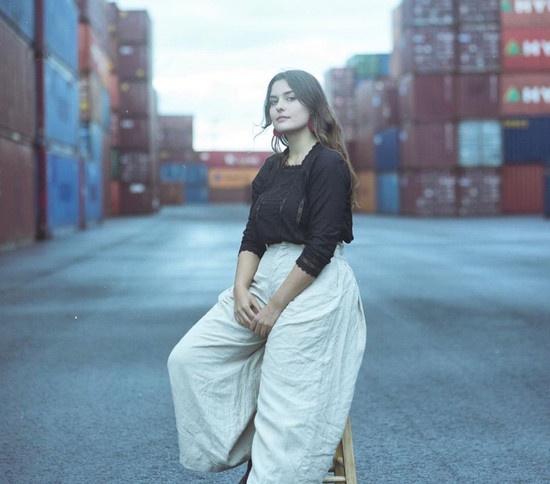 That’s not to say that Lila Blue doesn’t have her antecedents. There’s a dark folk quality to her music: echoes of experimental pioneers like Regina Spektor, Ani DeFranco, Joni Mitchell, and Fiona Apple are audible in her songwriting. Her choruses have the immediacy and emotional appeal of contemporary pop, even if their author refuses to follow the rigid rules of mainstream radio. Listen closely, and you’ll also hear the creak of the floorboards of the Broadway stage. But songs like “Half Of It,” and other compositions in her songbook, are better defined by what they aren’t. They’re not predictable, and they’re never entirely comfortable – and they’re impossible to resist.

And as so often is the case with gifted young writers, Lila Blue is prolific. She’s already released two albums and an EP, and she’s got plenty of unrecorded material in her songbook, waiting to be realized. Leave Me Be, her upcoming set, makes her vision and her versatility manifest – this is a songwriter with ideas to burn, wide emotional range, and a knack for memorable lyrics. Tastemakers have noticed: Lila Blue’s songs have been used in theatrical productions and filmed entertainment alike, including Lifetime’s Story Of A Girl.

Lila has also starred in Weightless, an acclaimed Bay Area rock opera based on a story from Ovid’s Metamorphosis. The “Half Of It” video doesn’t refer directly to the world of Weightless, but it feels haunted by similar ghosts. As a theater veteran, Lila Blue is well aware of the suggestive power of masks – and her co-star and love interest in the clip wears a hulking blue one that makes him look positively mythical. It’s an imposing mask, but it’s a sad one too, and the character’s interaction with Lila Blue reinforces the heartbreak and emotional depth of the song.