Nothing is quite like a hurdy-gurdy. The tone of the rare instrument is a bit like that of a viola, a bit like an accordion, and more than a little like an analog synthesizer on an otherworldly setting. But while the hurdy-gurdy is associated with folk dances and medieval courts, in the hands of a master, it can make music that’s strikingly modern. Eugene Purpurovsky of tAngerinecAt is a musician like that, and the hurdy-gurdy is the hand-cranked engine that powers the duo’s remarkable sound. 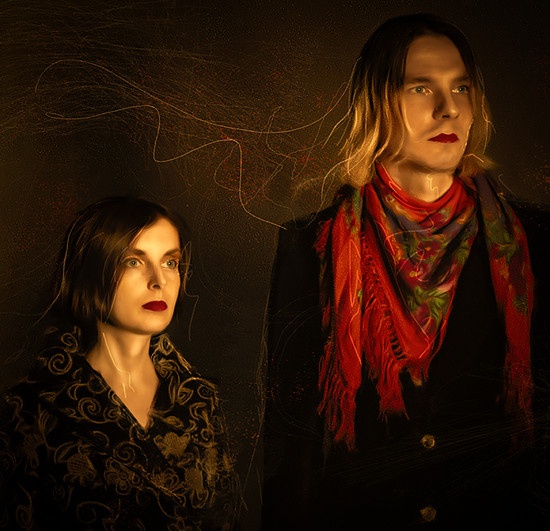 tAngerinecAt matches the Ukranian-born Purpurovsky’s hurdy-gurdy, voice, provocative lyrics, and production with the sound transformation, synths, bagpipes, and ethereal whistles and recorders of musician and sound designer Paul Chilton. Originally formed in Ukraine, where Chilton lived and studied music and the band has historical and musical roots, tAngerinecAt are now based in the UK. Both artists contribute samples, ambient noises, and processed beats that evoke DIY techno, raw punk rock, and spectral folk traditions in equal measure.

Many Kettles, the pair’s fourth album, casts a particularly dark spell. This is electronic music with a furious human pulse: a bold dance in the face of cruel authority that evokes “the feeling of a rave in a mausoleum” as Ben Knight of LeftLion put it. It’s also an outlet for Purpurovsky’s fiery statements of intent. The singer and hurdy-gurdy player has plenty to say about the parlous state of the world; “I Don’t Want To Be A White Master,” the kickoff track on the album, is a furious rejection of the rising global culture of fascism and cruelty. Through tAngerinecAt, Purpurovsky strikes back at oppression of all kinds – class, cultural, economic, ethnic, gender, and interpersonal – and invites the listener to join the resistance.

On “Roses From Blood,” the single from Many Kettles, Purpurovsky identifies as a pale faced witch and pirate with a blood red rose in his buttonhole. The clip for the song, which Purpurovsky directed projects the singers emotional inner world onto the screen, sometimes as a reflection that walks out of the mirror and sometimes prone and covered with roses. As the intensity of the music grows the camera flashes back and forth between the above mentioned images and scenes depicting fear, distress, self harm and rage. But Purpurovsky is also shown in concert, turning the crank on the hurdy-gurdy and hopping up and down with punk rock abandon. Chilton, too, demonstrates stage intensity, manning the machines with the determination of a scientist. The message is clear: no matter how marvelously moody this music can be, tAngerinecAt can bring the heat in a concert setting.

“Roses From Blood” is a very personal tale of Eugene’s own experience and struggle to overcome severe trauma, childhood abuse, poverty, gender inequality, dehumanization, stigma and challenges of being a migrant from a poor post-colonial country. It is important not just as a beautiful piece of art but also it is an amazing tool to break the stigma of mental illness both for Eugene and for the listener, and to highlight the causes that lie within capitalism and unequal society. It is an attempt by a marginalized person to become visible and to show that they exist and declare their right to survive.