Miami singer, songwriter, DJ, and MC Kēvens lives by a mantra: “Positivity is a Necessity.” The cynic in all of us might look around and dismiss such a feel-good formula for living, but the proof of its power lies in Kēvens’ impressive track record. He first made his mark as a member of Miami’s Le Coup, founded by Bob Marley’s half-brothers Richard and Anthony Booker. From there, he went solo and began to cross-pollinate rock, Trip-hop, Drum and Bass, and EDM, releasing his album We Are One and cementing his place in Miami’s music scene. Unable to stay confined to the 305, he took the stage at festivals worldwide, including South Korea’s Ultra Music Festival, Russia’s White Nights Festival, and the One Love Fest in Takamatsu, Japan. He has guested on songs by Richard Booker, Rabbit in the Moon, Heavyweight Dub Champion and Liberation Movement, and shared stages with The Jacksons, Stephen and Damian Marley, Steven Tyler, ICE CUBE, Major Lazer, Carlos Santana, Steel Pulse, and Armin Van Buuren, among others. “World Is Burning” is the work of a man who’s putting his many talents to use warning us that a big change is coming – and it’s entirely up to us to determine what kind of change it’s going to be. 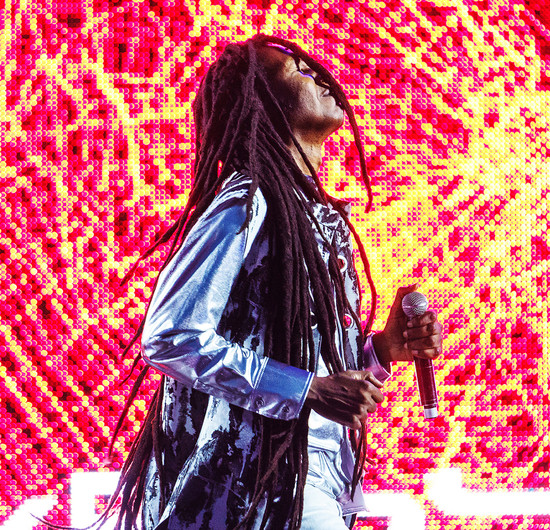 He had a song bouncing around his head and bouncing in and out of the studio for years. He recorded it and re-recorded it, but it wasn’t “there” yet. Then, on a much-needed vacation to Hawaii, Kēvens’ plane was notified that volcanic eruptions were occurring on the island as they were landing. He paid a visit to the newly reopened crater, and stood on a piece of ground that, the very next day, dropped without warning into the cauldron. Mother Nature’s immeasurable power made itself known to him then, and that was all the inspiration he needed. The track that had eluded him for years was finished within a matter of days. “World Is Burning” is an undeniable, spark-throwing livewire of Drum and Bass, with Kēvens’ uniquely plaintive but passionate sung/spoken vocals. It’s a super catchy party jam broadcasting an urgent message to those who choose to listen and take responsibility.

Every category of large-scale environmental devastation makes an appearance in the video, from satellite imagery of forest fires to aerial shots of dead, polluted wastelands. These visuals feel detached, almost like a newsreel; they don’t need dramatization or exaggeration to be completely terrifying. It’s the shots of people posing in gasmasks, or huddled in abandoned, ruined buildings, or wearing dollar bill blindfolds, that are filmed up close and personal to hit you right where you’ll feel it most. Rich, poor, black, white, Asian, European, old, young: we are all responsible. We are all affected and we are all in this together. That’s the takeaway: we’re only doomed if we remain divided. Forever promoting unity, Kēvens’ next projects include a fully-written track on gun violence, and a re-shoot of a video for a new song called “Sweet Lady Liberty” about our divided nation. Someone’s got to- because now, more than ever, Positivity is a Necessity.