The Brilliance has titled its album Suite No 2 World Keeps Spinning: An Antidote to Modern Anxiety, and no song addresses anxiety more squarely than “Just Be.” Built around mainly just a vocal and a piano backing, before strings enter the mix, it’s a little like a modern-day lullaby. In fact, it’s the sort of song one might expect Radiohead to record, if that band had been commissioned to create an album of just lullabies. 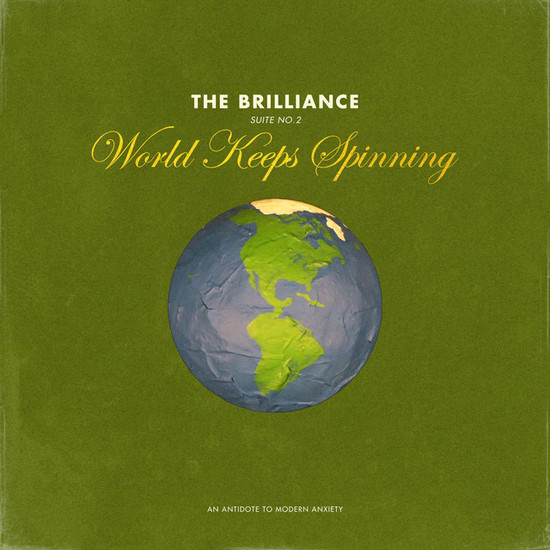 The duo, which makes up The Brilliance, includes John Arndt and David Gungor (who is popular Christian musician Michel Gungor’s brother). In fact, The Brilliance’s first album, Brother, was released by the Christian label Integrity Music, which even charted on the Billboard Christian Albums chart. That label also released the act’s second release, All is Not Lost. The Brilliance has also collaborated with The Liturgists, a musical collective mostly associated with the more liberal wing of contemporary Christianity.

Chamber-pop is the style The Brilliance’s music most resembles, although not everything on the album features strictly classical leanings. “How Do We Know,” which lyrically asks many of the big questions, is built upon an aggressive rhythm bed. Then with “Must Admit,” the track begins with what sounds like a choir, before a it goes into more of a piano ballad. The song’s melody bears a strong resemblance to Procol Harum’s “A Whiter Shade of Pale.” Once again, lyrics get deadly serious, as Gungor meditates upon the end of the world, no less.

One of these tracks, “Facebook,” uses the famous social media platform as its title. It’s an aggressive piece, too. The song’s lyrics speak about the search for truth. “We’re all living in our very own show,” Gungor sings, sadly. That’s exactly what “Facebook” is all about, too. Facebook (and Twitter, Instagram, etc…) is the modern world’s greatest gift to narcissism.

With what sounds a bit like a Gregorian chant, “I Shall Not Fear” is a vocal-only meditation upon learning to live peacefully and without anxiety. It plays out a lot like a church hymn and is written like one of David’s Psalms. It’s also a lovely, short (2:27) aural piece. Speaking of short, “I Wanna Know” is a piano-backed song about the desire to know – basically – what life’s all about, which clocks in at 46 seconds.

It’s doubtful many diehard Christian fundamentalists will dig this album. Tragically, many in the church are deathly afraid to ask big questions and express any doubt. However, we all ask God tough questions and feel serious doubt, even if this only happens in the privacy of our minds. Go ahead, though, ask God your questions; He can handle it. Will this album resolve all your modern anxieties? Heck no! Nothing can do that, at least not completely. The Brilliance is brilliant with this album, however, simply because it’s an act that dares to be completely honest. Yes, this old world keeps spinning (seemingly, spinning out of control), but
The Brilliance invites us to slow down and think deeply, and ask hard questions, which are placed within beatific musical setting.